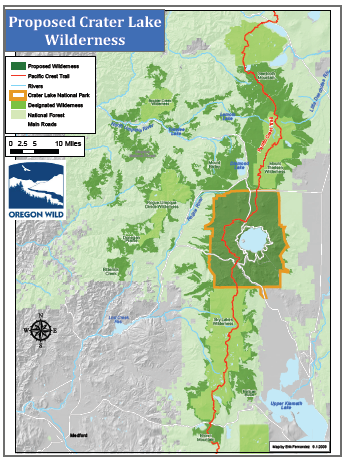 Oregon nature lovers may have a lot more pristine land to appreciate.

The Crater Lake Wilderness Proposal, created by Oregon Wild, would declare 500,000 acres of land, in Crater Lake and the surrounding areas, a nationally protected wilderness corridor. This would preserve the wildlife and natural resources of the area, will significantly restrict the use of machines that disturb the habitat of the region, and protect the area from the logging and removal of trees—and this is the flashpoint for the controversy around the proposal arises.

On the other side, Oregon Wild claims that the proposal will not only protect Oregon’s natural wildlife, but lead to growth for longer term sustainable businesses in the region. “There is a lot of concern for wildlife conditions, this will protect wildlife and recreational activities,” said Erik Fernandez, Oregon Wild’s Wilderness Program Manager.

Both organizations are fighting to educate their communities against misinformation on what the proposal is and how it will affect the community, resulting in conflicting information.

True enough, an economic study by Headwaters Economics shows that from 1970 to 2010 Western states that have numerous protected wilderness zones have seen employment rise four times faster than those that don’t. The study observed that “counties with more than 30 percent of the county’s land base in protected federal status increased jobs by 345 percent.” Counties that have little to no protected lands have only seen employment increase by 83 percent. In addition to this, counties with significant wilderness protection had a per capita income $2,180 higher than counties that didn’t.

While employment and visitation has historically grown in wilderness protected zones there is little denying the immediate economic hit on businesses and resorts that rely on motorized recreation.

Another concern raised by Jordan is the park service’s ability to fight fires. “If (a fire) is going to destroy a whole national park, then (firefighters) are going to use light on the land tactics and bring in equipment and do anything they can to put the fire out. (The proposal) will tie their hands with wilderness,” argues Jordan.

In wilderness zones, as opposed to a National Park, park services must ask their superiors for permission before using tactics that could damage the forest. While Fernandez claims this is typically done quickly and doesn’t inhibit firefighters ability to combat wildfires, one can’t help but wonder how many acres will be lost while going up the chain of command.

“This area does not meet that criteria,” said Jordan “You’ll see it strongly worded, ‘mankind cannot have left their mark on any form of the lands whatsoever’.”

Fernandez believes that the act will not impede on the proposal’s acceptance, saying Oregon Wild was sure to not include areas that have been interfered with. “We are being consistent with that, we are not including buildings and infrastructure,” Fernandez said.

Both sides are asking for people to contact their local officials to support or oppose the proposal respectively.