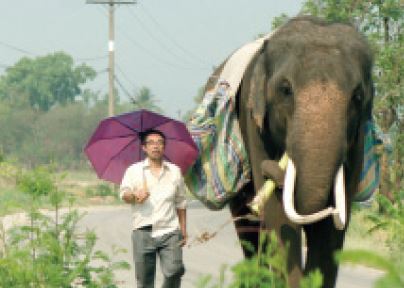 Why do we need animals to remind us of how to be human? Bad Lucky Goat, filmed on one of Colombia’s Caribbean islands and directed by Samir Oliveros, and Pop-Aye, filmed in Bangkok and rural Loei Province, Thailand, and written and directed by Kirsten Tan, revolve around their title animals (a black and white bearded goat in the former, and an Asian elephant in the latter).

Both films also ask questions which we are not likely to encounter in our daily American lives. In Bad Lucky Goat, the question is, “what do you do after your run into a goat with your parents’ truck?” (Warning Ashlanders: if you are an extremely sensitive vegan or animal-rights activist, this film will likely stir mixed-emotions). Pop-Aye raises the question, “How do you return a long-lost elephant companion to your childhood village?” These are not the sort of film concepts which get funded in Los Angeles, unless you happen to have Matt Damon or Owen Wilson attached to the project. Varsity World Film Week reminds us that not everyone views the world the way Hollywood executives do—thanks World Film Week!

At the outset of Bad Lucky Goat, teenage siblings Corn (short for Cornelius) and Rita torment each other only as siblings can. Corn aspires to record music and make his fortune selling cassette tapes to the tourists who visit “Port Paradise.” His sister, with even less direction than her brother, simply does not want to do anything that she does not want to do, an existential position likely familiar to any parent with a teenaged daughter. Rita insults Corn’s music; Corn disturbs his sister’s equanimity. Forced together on an errand for their parents’ inn, the hostility between the two siblings, a creation of their selfish self-absorption, generates bad energy well-captured by their sullen expressions and testy verbal exchanges.

The overall vibe on Port Paradise is what its denizens make of it. For Corn and Rita’s parents, the island’s beauty attracts the tourist business to provide a livelihood. For the island’s Rastafarians, the combination of jungle, ocean, and sky–superbly captured by the film’s cinematographer, David Curto—is a paradise on earth. For the unnamed crime boss of Port Paradise, of whom Corn and Rita run afoul, the island is an ominous, dangerous place. Like island communities all over the world, everyone knows everyone else.

Once the humans encounter the animals, the films unfold at a quiet pace, as one character in Pop-Aye puts it, “elephant speed.” The films deliberately reflect on the nature of the human condition—the paradoxical combination of sublime and absurd. Keep an eye out for when Corn offers his sister a bite of a crab pattie, or when Thana attempts to ride Popeye. American big-budget, special-effects laden extravaganzas rarely allow for such magic (Wes Anderson movies excepted).

What both films accomplish is to raise deeper questions through the mundane ones. In Bad Lucky Goat, Corn and Rita stand in for every brother and sister, for all human kind. Will we jealously pursue our petty self interests, or will we open our hearts to others and honor our connections? For Thana, the artichect, the engineering and design required to survive in the city has deadened his connection to his wife and his own heart, represented by his childhood in a rural village with an elephant in his care.

Toward the end of Pop-Aye, Director Tan allows the audience to share the elephant’s reflection on his life in Bangkok. It is clearly no place for an elephant. The larger question is whether it is a fit place for a human, either. In Port Paradise, meanwhile, brother and sister do not even require an apple to generate discord. Mere pettiness suffices. The root of “animal” is the Latin word, anima, itself a translation of the Greek, psyche, a complicated concept—”soul” or “spirit” are possible interpretations. Perhaps animals work as reminders, as Bad Lucky Goat and Pop-Aye suggest, that we are not as distinct from each other as our Western, techno-scientific world view says we are.