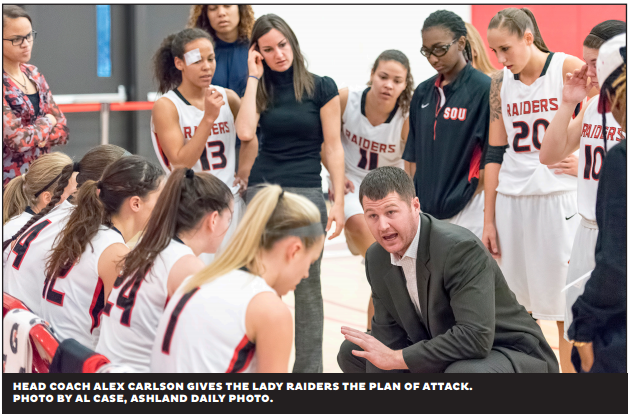 As the only undefeated team in their division in the nation, the Lady Raiders sit at 15-0 overall and 8-0 in the Cascade Conference as of the second week of January and halfway through this season. Let’s just say they are roaring along with no sign of slowing. Could this success be due to their new head coach, Alex Carlson, former player at Oregon Tech and holder of various roles at Boise State, Pacific University and Alaska Anchorage? Most likely, but like the good coach that he is, he attributes the credit back to the players.

“They work extremely hard,” he says. “As a coach, it is exciting to see their success; they deserve it.”

This is Carlson’s first head coaching position, though his experience on the court speaks for itself—he still ranks third in rebounds and 10th in points scored on OIT’s career lists. His stint in Alaska being his most recent, he is happy to be back in the great state of Oregon. (He is originally from Culver, and he coached at Culver High after graduating from Oregon Tech.)

“It is a great set up here for me,” he says. “Coming into a place like this at the college level, you look at everything at once. The people who come and play are high quality people who are good athletes and good people. And just to get to live in the Rogue Valley is very exciting for me and my family.”

The Lady Raiders came in 8th in NAIA Division II coaches’ poll that came out January 12, and they were the only members of the Cascade Conference to make it into the top 10. And, as previously mentioned, they were also the only undefeated team. They happily find themselves in a position they haven’t been in since the 90s.

The weekend of January 9, they accomplished the most lopsided Cascade Conference win in team history to the tune of Raiders, 115, and the Walla Walla Wolves, 40. They were out of town last weekend to face the College of Idaho and Eastern Oregon, both of which are formidable adversaries with Eastern Oregon winning the last three season Cascade Conference titles.

“If we want the championship; we need to take it from them,” vows Carlson.

And the plan for the rest of the season?

“We want to work on keeping our energy high, and play a fast tempo of basketball,” he adds.

With 16 players in all, Carlson says he is pleased with the amount and the spread of the team. And with only three seniors, no matter how this season turns out, next year promises to be exciting as well.

“We have a really good mix,” Carlson says. “It is not so big that you have to recruit from all over the place, but we have kids from as far away as Washington and Northern California, which is exciting. We think that adds to the experience; we have city kids and rural kids. And our GPA was just under 3.40. They are successful and impressive. Basketball is a priority for us, and these kids are also very talented in school as well.”

Want to get in on the action? They will be back on the home court against Northwest University on January 23 and Evergreen State College on January 24.

“The game environment is a lot of fun,” says Carlson. “When people come out and see them, it is not just something that you watch on TV. After the game, you can go up and say ‘hi’ and talk to them if you want to.”