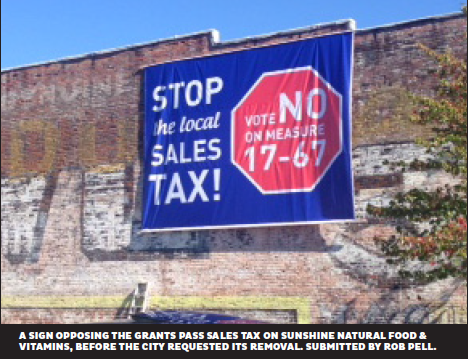 From the perspective of many business-owners in Grants Pass, the idea for a sales tax—in Oregon?—came like on an unwelcome, fast-moving thunderstorm. There had been rumblings some three years ago, when the city apparently conducted a phone survey to judge interest. But then, the idea seemed to go quiet again.

Until this May, that is, when city council formed a task force to consider the idea to implement a two percent sales tax on many retail items and, then, in July hosted a public forum to present the idea.

The forum was packed with a few dozen residents; mostly business-owners opposed to the idea. What it wasn’t packed with, however, were city council members: Five of the eight were reportedly absent—leaving many business-owners upset by process by which the tax has been proposed as by the idea of the tax itself.

On August 14, the City of Grants Pass filed a “Notice of Measure Election” with the central question: Should the City implement a 2 percent sales tax? A recent city newsletter that goes out with each water bill ran a cover story singing praises for the ballot imitative.

In response, over the past few weeks, dozens of signs have popped up in storefront windows around downtown Grants Pass, a rare controversy for a mid-term election. Rob Pell, the owner of Sunshine Natural Food & Vitamins, draped a 15 foot banner across his building, “Stop the Sales Tax.” A day later, the city ordered it removed.

“It’s not a question about if the business will leave,” Pell said in a phone interview with the Messenger, “the question is how much.” He added, “I’ve worked too hard to build up my business to have a reduction.” Sunshine Natural Food & Vitamins recently celebrated its twentieth anniversary, and Pell predicts that he could suffer as much as a ten percent loss if the sales tax is implemented in Grants Pass, as customers go to businesses in nearby cities without taxes (i.e., most everywhere else in Oregon).

“Its human nature to want to save money,” posited Pell. “This is a price-sensitive area. I see people leave my store because I didn’t have a coupon for a buck or two.” He added, “It would create a sales tax island.”

The proposed sales tax would apply to food and retail items starting on July 1, 2016. Unprepared food, prescription medicine and purchases over $1000 would be exempt. Interestingly, the sales tax initiative also would eliminate a $1.79 property tax per $1000 assessed value of a home—and, in many ways would shift the source of the tax revenue stream from homeowners to business-owners. Property taxes for the average city home, points out the filing document for the initiative, would be reduced by $277 annually.

In May, voters in Josephine County voted down a five-year property levy that would have raised $9 million annually to restore sheriff patrols, and reopened a youth shelter and counseling center. The vote was 54 percent to 46 percent. It was the fourth time since 2012 that voters have turned down a public safety levy. It would have cost taxpayers $1.40 per $1,000 in assessed value, or $280 a year for owners of a home valued at $200,000.