Home»News»Running With The Pack: Making A Remarkable Return to Oregon, Wolves Face Their Next Chapter
News

Running With The Pack: Making A Remarkable Return to Oregon, Wolves Face Their Next Chapter 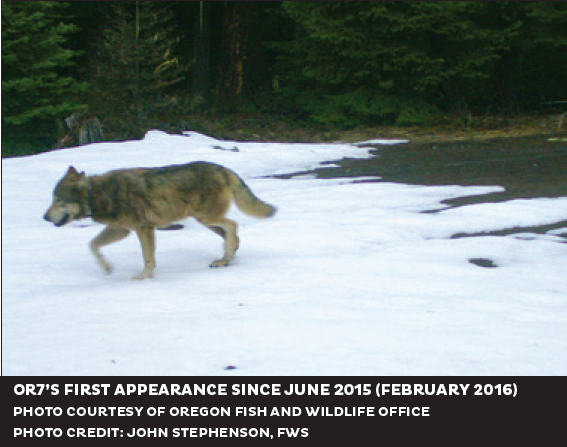 In wildlife biology circles—and, for that matter, for outdoor enthusiasts in the state—OR-7 has celebrity status that rivals Brad Pitt. Even his full name sounds like the title to a Hollywood celebrity-driven superhero movie: OR-7 of the Rogue Pack.

Five years ago, to the chagrin of some ranchers and to the joy of conservationists, OR-7 achieved notoriety when he became the first grey wolf recorded in western Oregon since 1947. He had been tagged in the far northeast corner of Oregon before wandering a diagonal route southwest for more than 1000 miles, dipping into California (where he was the first spotted grey wolf in that state since 1924), before returning to the Rogue River watershed in 2014—with a mate!

But, attendant with his Brad Pitt-like celebrity status, OR-7 wasn’t afforded much privacy, and his mating habits were watched, recorded and fussed over, until in 2015, his mate popped out a few pups and biologists designated a name for OR-7’s family that Frank Sinatra would envy: The Rogue Pack.

More than a single success, though, OR-7’s incredible journey is indicative of a larger rebound for wolves and a decided success story for species conservation.

Over the past five years, there has been a five-fold increase in the wolf population in Oregon, from 20 wolves in 2010 to more than 100 in 2015. What’s more, those trends have every indication to steadily improve over the next five years. In 2009, there were only two packs of wolves in Oregon in 2009, with only one of those two “breeding.” By 2015, those numbers had increased to 12 wolf packs; 11 of which are breeding.

The majority of those packs congregate and range in northeastern Oregon, but there are four significant “known wolf use areas” dotting the map between and north of Medford and Klamath Falls. All told, what was one known wolf four years ago in southern Oregon, there are believed to be more than 20 today.

Last October, the batteries in OR-7’s radio collar ran out (seems like a missed opportunity for the Energizer Bunny product placement!), and, since then, OR-7 and his crew have been elusive, with the last sighting in February when a trail camera in Siskiyou National Forest spotted him.

The return of wolves to Oregon has been a mixed blessing. Earlier this year, Governor Kate Brown signed a bill delisting them from the state Endangered Species Act, an act which lessens their protections. (That action is currently being legally challenged.)

On Friday October 21, KS Wild hosts an evening discussion at the Medford Public Library featuring Richard Thiel who served for more than 30 years on Wisconsin Department of Natural Resources and oversaw the wolf recovery program in that state. Staring in the 1970s, Wisconsin began to re-introduce wolves to northern sections of the state. The rise and fall of—and tensions with—public opinion is instructive what Oregon may see unfold in the upcoming years.

“Public opinion towards wolves has shifted in Wisconsin over the past three decades,” explained Thiel in an email interview. “Initially, lots of animosity followed by an ‘acceptance,’ possibly because of education efforts coupled with the ‘novelty’ of them returning to the state.” He continued, “Opinion began souring in the mid 2000s in response to rising conflicts, and citizen frustration over a series of federal lawsuits that vacillated their federal status from delisted to endangered (four times in 10 years). Not only did this lead to confusion, but it also eroded support for wolves and more broadly, for endangered species.”

Those tensions already are begin to show in the Pacific Northwest. In August, the Washington Department of Fish and Wildlife killed six of the 11 wolves in the Profanity Peak Pack, a group of wolves living in northeast corner of the state. The number of wolves in Washington is roughly the same as Oregon and, over the past year, there had been 11 confirmed livestock killings by the pack—also a number roughly the same as those incidents in Oregon.

Those concerns by ranchers are set against the public popularity of wolves like OR-7, and point out conservationists, are mitigated by the small number of actual attacks by wolves on livestock—or, what the Oregon Fish & Wildlife label “confirmed depredation events.” In spite of the boom in wolf populations in the state, attacks have not increased. In fact, in 2015, even as the wolf population increased by 25 perfect or so, the number of “wolf depredation of livestock” remained constant; nine incidents were confirmed. In southern Oregon, this translated to one calf killed and two injured last November near Klamath Falls.

“The tale of the Big Bad Wolf is slowly but surely disappearing,” assures Beckie Elgin, who also will present on October 21. Her book Journey: The Wandering Wolf will be released this month. “Evidence of this can be seen in a poll hosted by Oregon Wild in 2015 regarding state protection for wolves,” she points out. “The results were that 66 percent of those polled favored protections while only 30 percent opposed it.”

Elgin is optimistic that wolves will continue to rebound in Oregon. “I believe it will be just a matter of time before the dispersal leads wolves to other regions in our state,” she says. “A study by two OSU biologists stated that there is a potential for Oregon to house over 1,450 wolves, including on the coast range. Even if this number is an exaggeration, we are clearly in the early stages of wolf recovery.”

Running With The Pack: Making A Remarkable Return to Oregon, Wolves Face Their Next Chapter