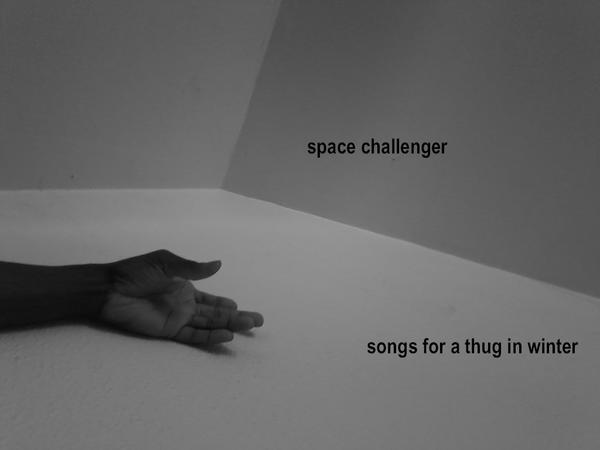 The first time I saw Kelvin Underwood perform was an experimental hip hop open mic in Ashland. Most of the other emcees played beats from their phones and lazily rhymed about weed. He came on stage with a massive Japanese taiko drum, and complex, polyrhythmic flows so sociopolitically savage that Zach De La Rocha would have blushed at his set.

Though it was only a handful of songs, it was one of the most compelling live music performances I’ve ever seen in Ashland in a long time.

But sadly, I hadn’t heard anything from Underwood since. Until Songs for a Thug in Winter, the new album from his solo band, Space Challenger recently arrived in my inbox. And to shoot from the hip, it is every bit as unexpected and fascinating as that brief live set.

The self-produced ten-song collection fuses hip hop, ’90s alt-rock, R&B and indie rock. It doesn’t just move back and forth from Raphael Saadiq, to Sleigh Bells, to Local H, to Death Grips from one track to the next, but frequently within the same song.

It isn’t always good. Sometimes the concept versus execution plays out like reach outstripping grasp. A sour note here. A warbled vocal there. A less than stellar chord change or a muddy tone.

But damn, what a reach.

The title track, “Song for a Thug in Winter,” is an epic journey that starts as a simple Wyclef-esque guitar lick and harmonized vocal that builds over five minutes into a densely layered hip hop deconstruction of America’s racial politics.

“Under my hoodie is the sensitive type/despite the stereotype/and the media hype,” he raps.

That’s followed by “Shoot to Kill,” a hypnotic indie-rock track about a danger-fraught encounter with the police. The rhythm is carried by backup vocals beneath a jarring chord progression, as Underwood evokes the soul-rock wail presence of Lenny Kravitz in his vocals.

The fifth track, “My Revolution,” brings in a lot of distortion, and borrows snatches of melody from “We Shall Overcome.”

Track nine, “Fadin’,” is another standout. Underwood’s dual vocals technique pairs harmony and growls to turn a simple chord grungy progression on the guitar into a dramatic monologue.

It ends with “Deep as Oceans,” a sprawling, emotive ballad.

Due to some spotty polish on the recording, and a few skip tracks (just one reporter’s opinion), I can’t truly say it’s the best album to come out of Southern Oregon recently, but in the same reporter’s opinion it’s certainly the most exciting, bringing an unmatched energy and diversity of sound. Though Underwood will no doubt be busy with his new gig drumming for local indie rockers, Slow Corpse, I hope he’ll still have time for more Space Challenger.

Songs for a Thug in Winter is available for download from iTunes, or for streaming on Spotify.