Home»Sound»Rogue Sounds»ROGUE SOUNDS: Safe and Sound – Caught In a Dream by The Brothers Reed
Rogue Sounds/Sound

ROGUE SOUNDS: Safe and Sound – Caught In a Dream by The Brothers Reed 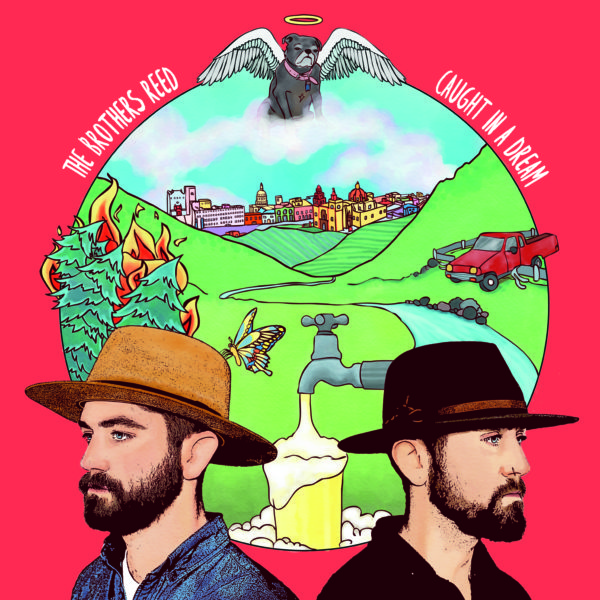 The Brothers Reed have come to prominence in the southern Oregon folk scene over the past several years, touring extensively throughout the US and releasing three studio albums to date. This month they are set to release their fourth, titled Caught In a Dream.

The album begins with the soft, mostly acoustic “Sweepin’ In The Kitchen,” driven forward by a gentle bed of fingerpicked acoustic guitars, shakers, and a round, settling bassline. The song begins with the lyrics, “I’m just a troubled lad, you don’t want no part of that, wakin’ life ain’t what I choose, I prefer hittin’ snooze,” setting the subdued, somewhat sleepy tone of the rest of the album. The track continues on to tell the vague story of a person yearning for the opportunity to correct their past mistakes, complete with an obligatory reference to “gettin’ pissed and throwin’ fists at God, or whatever is listening.”

The pace of Caught In A Dream picks up on the third track, “16oz.” The instrumental palette is broadened with the incorporation of electric guitar, drums, and organ to interesting effect but yep you guessed it, it’s a song about how, “these 16 ounces are my only friend.” This track highlights one of the main pitfalls of this album. We’ve all heard plenty of tear-in-my-beer country songs before—and for good reason. They can be a really great vehicle for complicated emotions. The thing about “16oz” is that it doesn’t seem to offer anything new in this area. If I wanted to hear this sentiment, I’d rather do so by someone with something new to add.

That’s not to say this album is entirely without personality. Take for example its fifth track, “Smith River.” The lyrics here are bound to grab anyone from southern Oregon with their references to local landmarks. The track goes on to outline the personal dissatisfaction of its narrator with lyrics like, “well I’ve got some buds, and a wife I love, a nice guitar, and a couple pups. Why can’t I shut off my mind?” While this track certainly doesn’t lack in honesty, it may do so in relatability. The lyrics on Caught In A Dream are emphasized heavily, leading the listener to pay close attention to where they lead. They are sometimes difficult to immerse oneself in due to their tendency towards either cliché or trite self-observation.

In terms of musicality, this record is obviously made by some very talented players. The harmonies are spot-on, the rhythm section is tight, and the arrangements skew towards layered/sparse in all the right places. The Brothers Reed are very good at putting together a song in these ways, but one wonders when they will have something unique to say.

On the last song of Caught In A Dream titled “All Dogs Go To Heaven,” we hear the story of an old man named Pete coming to terms with his own mortality. This track highlights some of the Brothers’ penchant for humor to great effect. Lyrics like “he lived in the woods in a bacon-filled house” (in reference to a “Lion who roars like a mouse”) show another side of the Brothers Reed, one that knows how to use humor to enrich a message.

ROGUE SOUNDS: Safe and Sound – Caught In a Dream by The Brothers Reed