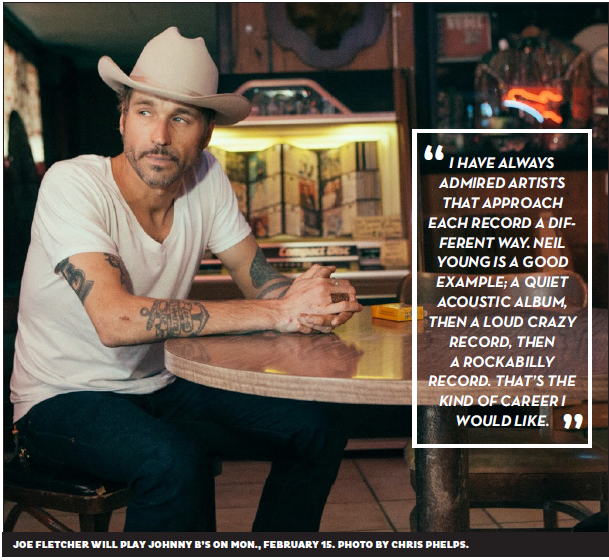 Mondays, famously hated by obese cartoon cat Garfield, are usually allocated for lamenting the death of yet another weekend. Fortunately, though, if you’ll be in Medford on February 15, you can drown your sorrows to the gruff croonings of singer songwriter Joe Fletcher.

Midwest born Americana artist Joe Fletcher is currently on the road in support of his third album, You’ve Got the Wrong Man, an emotionally charged collection of acoustic songs taken down on four track cassette recorder. It’s quite the departure from the full band honkey-tonk stylings of his previous album, White Lighter.

“I have always admired artists that approach each record a different way,” says Fletcher. “Neil Young is a good example; a quiet acoustic album, then a loud crazy record, then a rockabilly record. That’s the kind of career I would like. I’ve used the same four track as a writing tool and for recording demos. I just really liked the way they sound and I’ve thought before about making a solo acoustic record that way.”

This bold choice of recording gives the album a very naked and intimate feel. On tracks like “Miss Red” the lyrics are pushed to the forefront unmasked by gimmicky studio effects. Most of Fletcher’s songs are stories, so it’s unsurprising to hear he draws his inspiration from literature.

“Authors are more of an influence to me than, say, Bob Dylan. I don’t sit down and listen to Highway 61 then go write a bunch of songs,” he says.  “Whereas I might read a Cormac McCarthy book or Scott Fitzgerald. That will get my wheels turning a lot quicker.”

“It’s about finding images that speak to you, maybe you think that it could resonate with other people. I don’t always know exactly where it comes from and why. I don’t really like to struggle with the reasons.”

Much of Fletcher’s time is spent on the road and in his travels he has played with the likes of Devil Makes Three, Lucero, and Robert Ellis.

“Traveling is pretty hectic, there is a lot of stuff to worry about. Often you’re not in the place you’re going to sleep until two in the morning, and then you got to get up and drive.”

Despite the uncertainties of travel, Joe is resolute in his creative process and is currently working on another album to be recorded with his band, The Wrong Reasons.

Fletcher is no stranger to Oregon audiences, having played the Ashland Armory with Devil Makes Three.

“That stands out in my mind as one of the craziest and most terrifying audiences of my carreer. Those crowds were nuts,” he said in jovial anticipation of yet another Rogue Valley show.