Home»Sound»Rogue Sounds»ROGUE SOUNDS: You Can Hear The Brothers Reed Deciding Who They Want to Be on New Album
Rogue Sounds/Sound

ROGUE SOUNDS: You Can Hear The Brothers Reed Deciding Who They Want to Be on New Album 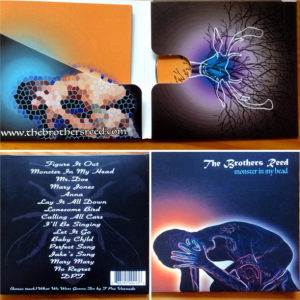 The Brothers Reed, half of local cowpunks Bucklerash, launched as an acoustic duo a little over a year ago. Their debut album, Sick as Folk, was one of 2015’s best local albums, chock full of catchy songcraft and the sweet oozinaahs of the bros entrancing two-part harmonies.

But the band’s work ethic is as impressive as its music, and the band is already dropping a follow-up, Monster in My Head, which The Brothers Reed will release with a special full-band performance at Brickroom on Sat., March 19. And the distance the band has travelled is clear from the opening notes.

Though still rocking the signature harmonies, the first track, “Figure it Out,” is carried by chords on an organ, not The Brothers Reed’s twin acoustic guitars, and it is driven forward by a series of handclaps. It’s a song far more evocative of The War on Drugs than Townes Van Zandt.

That motif comes back on the album’s gospel-esque 11th track, “Baby Child.”

But not all the band’s travel is strictly forward. Whereas the folk and Americana vibe of their debut was of the Wilco school, tracks on Monster in My Head like “Lonesome Bird Pass,” the album’s seventh track, hew far closer to old-time. That song is a somber, folky waltz, dressed up with hints of mandolin of just the variety one would expect to ring forth from the front porch of a log cabin in Oregon’s pioneer days.

The folllow-up, “Calling All Cars,” sounds a bit like a Simon and Garfunkel Nashville-recorded outtake, and the 10th song could pass for an early Dylan song, had only someone given the poor bastard a throat lozenge.

The 9th track is “I’ll Be Singing,” a Jason Mraz-esque reggae tune that is a bit too saccharine for this critic’s taste, especially as the track feels a bit under-produced relative to its neighbors.

The signature style comes back on the 12th track, “Perfect Song.”

“Jake’s Song,” the 13th track, is one the album’s best tunes, carried by a gritty electric piano for a soulful sound.

And the final tune, “DPT,” a constantly morphing and slowly building piano epic, is far and away the album’s most interesting offering.

Altogether, though it has some truly captivating moment, on the whole Monster in My Head is a bit inconsistent. Whereas “Sick as Folk,” was a focused album that revealed a new dimension and sound to its members, Monster in My Head is scattered. It broadens The Brothers Reed’s sound, but not always in ways that feel like the unified thesis of an album so much as the collection of tracks that makes up the bonus tracks in a box set. Some songs sound like they might go better on a Bucklerash record, and others feel like promising experiments only half-explored, like the band is trying out styles to see what sort of band it wants to be in the future: a rootsy acoustic duo, or something else yet to be determined.

But whatever shortcomings Monster in My Head has, are likely to be short-lived as The Brothers Reed are rumored to already be at work on a third album.

ROGUE SOUNDS: You Can Hear The Brothers Reed Deciding Who They Want to Be on New Album