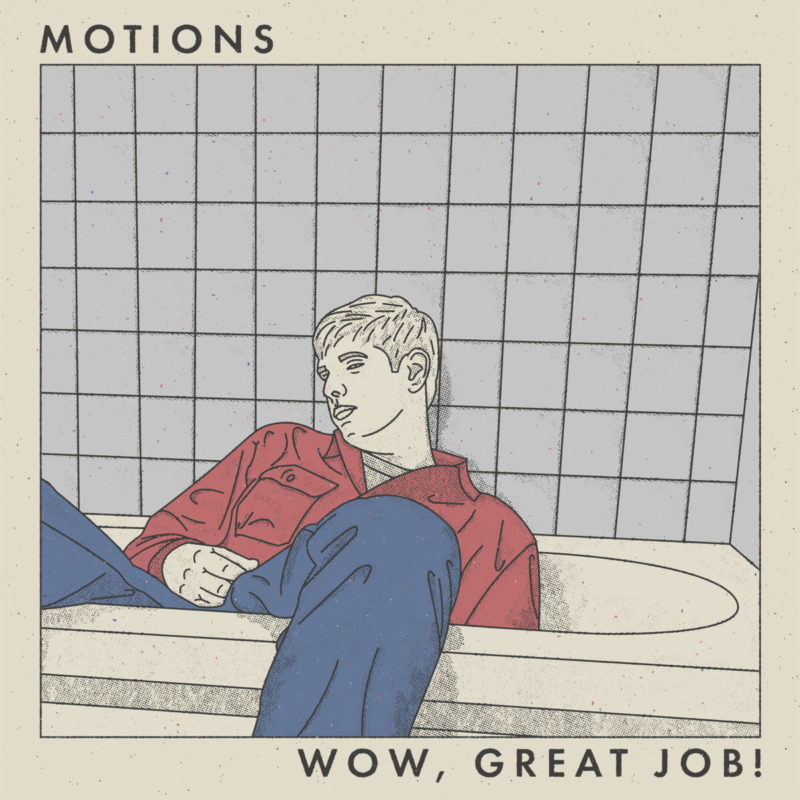 I never cared for emo. Even just a few chords from bands like Dashboard Confessional, or Saves the Day, caused me to slip into some absurd macho stereotype of a high school football coach complete with the overwhelming urge to grab the band venting their inner turmoil by the ears and shout “WALK IT OFF, CUPCAKE.” But for every legion of insufferable whiners, there was a Jimmy Eat World, or a Get-Up Kids; bands that managed to rock and roll with a bit less douche and a little more heart, which was an admirable goal.

That is the direction taken on Wow, Great Job!, from Medford self-described emo/indie group Motions, who released the four-track EP to Bandcamp in July.

The opening track, “Capable,” moves back and forth between soft and loud, opening with a dreamy arpeggio and soft, nearly spoken vocals, which are quickly and decisively blown away by percussive blasts of overdriven guitars and gutsier vocals. It crescendos up into a heavier, noisy ending.

The second track, “Cursive,” moves things back in the softer category, with clean twinkles of guitars over a slow, head-bobber of a drum beat. There’s a lot of tight interplay between the drums and the guitars strumming patterns. The bridge ranks up the overdrive, but it doesn’t have the heavy beat drop of “Capable.”

Track 3, “Boxes,” keeps it mellow, with a lagging snare roll and clean, dreamy guitars. When it picks up in the middle, it the vocals keep the same dreamy tone (even with screamed backups), providing a nice continuity.

Wow, Great Job! Closes with “Panasonic,” and it largely sticks to the not-broke-so-why-fix-it formula of the previous three tracks. Dreamy, lagging opening verses with complex underlying drum patterns that all build to heavier breakdowns with a lot of staccato blasts of overdrive, until it fades back into the arpeggio that it began with.

On the whole, no new ground is being broken on Wow, Great Job! But all four songs sound great, with solid chops and good songs. The recording from blossoming local superstar producer Evan Kunze manages to sound both raw and polished at the same time, a rare feat and one that serves the songs well. If this is the emo of the future, then bring on the eyeliner and daddy issues. But not the hair. As was established in the case of Dashboard Confessional’s screaming infidelities vs. nineties rock music, it gets everywhere.

Wow, Great Job! is available for streaming and download on Bandcamp.