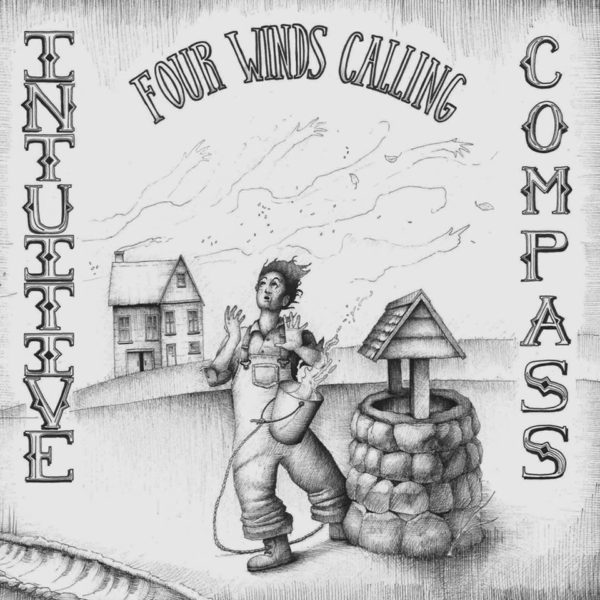 Intuitive Compass is a band from Applegate, Oregon comprised of Jason Dea West and Aurelia Anne Cohen. Self-described as “Purveyors of ‘Original Western Folk Music,” Intuitive Compass plays straight-up folk music. With a lot of artists today attempting to take traditional forms of song and bend them into a modern shape, it is quite refreshing to hear a band who is truly paying homage to the classics. Even on their new record, titled Four Winds Calling they stay true to this vision.

The record begins slightly left of center with a couple dissonant chord flashes, coming together quickly with a very catchy “hoo-hoo-haw” chorus. Something that immediately stands out about this record is the production. It’s not every day one hears a folk record that sounds this put together.

The record continues on into the mournful “Heroes Unsung.” This track sees Cohen take over lead vocals from West, helping to broaden the emotional impact of the song. One gets the sense that Intuitive Compass’ throwback sound is more than an affectation in this song, with them singing lines like “this was their home, where the buffalo roam, and freedom was more than a word; run where they would, or eat where they stood, with nary a border or law.” It’s hard to hear these lyrics without their political implications, but I’d wager that’s exactly the kind of double-meaning the band is going for.

The album continues on through the beautiful “Beads Around My Neck,” picking up the pace a hair. This track returns lead vocal duty back to West just in time for him to sing his woes about there being “no more cowboy poetry.” One of the beautiful things about Intuitive Compass in their ability to turn lyrics like this into something special. If uttered by anybody else, that line might come across as hokey or disingenuous, but not in these hands.

The sixth track on the album, titled “Ghost Horse” is perhaps one of its most whimsical. Featuring no lead vocal (at least none with lyrics), the track appears to be a sort of interlude to help the album along. It’s a really nice way to let the record breathe, especially in an instance such as this where the lyrics are of such importance to the songs. The record ends with the distinctly upbeat “Goodbye Josephine,” reading as a sort of love letter to the hills of southern Oregon. Somehow Intuitive Compass return something to folk music (at least locally) that has been desperately lacking in recent years: A heart.