ROGUE SOUNDS: The Phone’s For You – JAYA (Raise)’s Called / Or / Uncalled 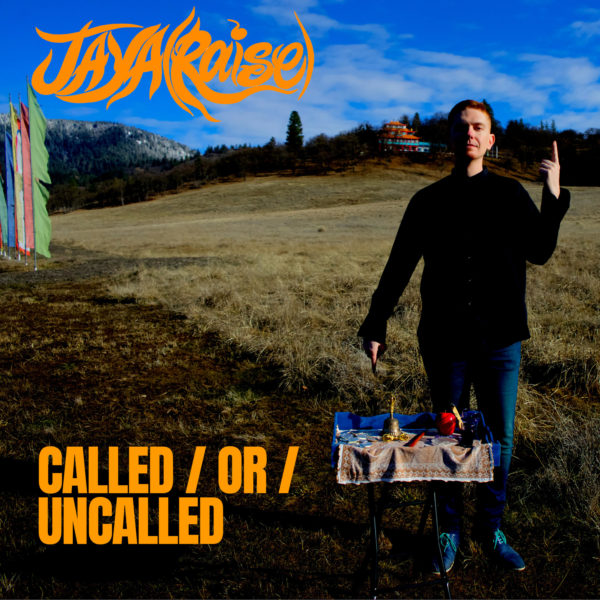 JAYA (Raise) is the stage moniker of Ashland-based conscious hip-hop songwriter/rapper/producer Christian Altman. Having spent the better part of the past four years releasing singles and collaborations on his SoundCloud page, Jaya has finally delivered his first full-length album entitled Called / Or / Uncalled.

The first track on the album, “unstuck,” right off the bat features Jaya’s interesting taste for arrangements. The track opens with the chime of bells, smartly echoing the bell shown beside Jaya on the album’s cover. Throughout this first track, we get a taste of what is to come from the rest of the album. It’s groovy, it’s catchy, it’s smart, and above all else, it’s resonant. Following “unstuck” is the woozy, soulful “somespace.” On this track we get a more concise image of what exactly Jaya wants us to see. The instruments take a bit more of a backseat featuring more prominent lyrics: “And what a play it is, characters die and live, and yet the play goes on, so who you playin’ with?”

Jaya’s way with words certainly graces this album often, but what I find so intriguing about Called / Or / Uncalled  is the immediacy lent to these words by choices in the arrangements. Take for example the moment on “rise&shine” when Jaya spits “honorary doctorate, professor here to talk a bit, dropping education like the mic at the school.” Neatly placed behind the vocals in this section is the sound of an actual microphone being dropped. It’s this very concise attention to detail that sets Jaya apart from his contemporaries. This is especially refreshing given other conscious hip-hop artists’ tendency to be (in this writer’s humble and often wrong opinion) too doting over their own lyrics. Jaya isn’t afraid of injecting levity into his work, and it shows.

This levity is further exemplified in one of Called / Or / Uncalled’s several interludes (or ‘ludes as the artist lovingly refers to them) titled “clubputo.” We hear a brief interaction between Jaya and a woman in a club hilariously struggling to communicate about what they’re drinking. It’s light moments like this that humanize Jaya and the message he is trying to communicate.

In a bio attained from the artist, it states: “Jaya wishes six things for all sentient beings: Health, Wealth, Happiness, Beauty, Love & Truth.” It is this sort of compassion that blesses tracks like the beautiful “truth.” Jaya delivers lines such as: “I inhale good intention, exhale love, respect” with refreshing honesty. Where other artists might espouse these types of values as a way to sell records and promote shows, Jaya’s words come from the heart.

ROGUE SOUNDS: The Phone’s For You – JAYA (Raise)’s Called / Or / Uncalled