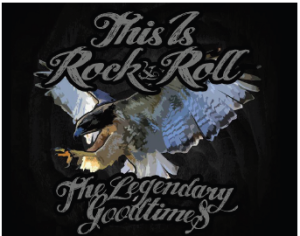 The Legendary Goodtimes 2013 self-titled album is an exercise in purism, with 12 tracks of straight-ahead no-nonsense rock and roll, recorded on analog equipment in single takes. Their follow-up, This is Rock and Roll, which the band will officially release at Howiee’s on Front on Sat., March 5, is even more so.

“[On this album] I think we’re just more of the band we were before,” says bassist, David Moore. “We’re tighter. We’re only a three-piece, so we have to be kind of concise in the way we write songs. Don’t have a lot of wiggle room. We tried to double down on that for this album. Get tighter, get simpler. We kind of tried to do that on our first record, but we were so new and so raw, any tightness there was was luck.”

One place the band identifies that got special attention was the drumming.

Listening back to the first album, I realized I didn’t want to play that many fills,” says drummer, Mark Anderson. “It was too busy. Just too much. Opening it up with less noise allows the vocals to come through. It sounds like it is easy music to play, but it isn’t. Because you really have to restrain yourself. As a drummer I really had to hold back. It takes a lot of listening.”

But the band’s front got just as much attention as its backbeat.

“There wasn’t really a lot of harmony going on, on our first record,” says Anderson. “It was raw and in your face. This album has a lot more melody and you can hear the harmonies a lot more. Dave opened up with the guitar in a couple of ways that we didn’t do on the first album.”

“We were all trying to go simpler, with everyone contributing as a group,” says Moore. “Doing what the music calls for instead of everyone just trying to fill space.”

One place on the band’s newfound austerity is on display is its fifth track, “Two Trains,” which is as straight and driving and fill-free as a Bon Scott-era AC/DC tune, with the vocals coming in during a guitar break to really take centerstage.

Another is the sixth track, “Painted Heart,” which slows things down a bit and brings in an organ and melodies for a song that sounds like a rawer tune from Kansas or Chicago.

The Legendary Goodtimes mostly recorded This is Rock and Roll in one marathon three-day session with Mark Thomas Johnson of BlueJay Productions in Jacksonville last year.

“We went in with four reels of tape,” says Anderson. “Did four songs and then two bonus acoustic takes. Did ’em all in two or three takes. Half the album was first or second takes. The only overdubs were vocals. All of it was played together, live. And you can hear it. Because it’s not a flawless record.”

When they finished, the band sat on the record instead of releasing it immediately, because they wanted to be sure to do it right. Consequently, they’re already at work writing material for This is Rock and Roll’s follow-up, and looking at some potential small touring options, mostly weekenders. The band says it is more interested in the good times than the big time.

“We’re not doing it for world domination,” says Anderson. We’re doing it for the fun, and the music. If this were about the fame, we’d have been done long ago.”