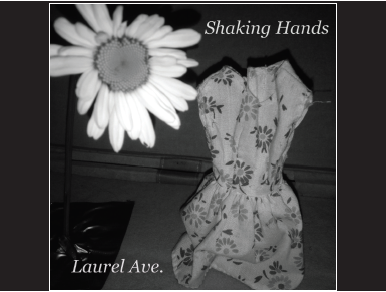 In the last issue of The Messenger, this reporter wrote about how the vitality of Ashland’s music scene has taken a massive nosedive recently, while the scene in Grants Pass is on the upswing. That article was about the lack of venues, and how that restricts stylistic diversity, but the thesis reared its head again this issue while looking for local albums to write about. Typically, Ashland musicians regularly add new albums to Bandcamp, a major online sales site and distribution site frequently referenced in Rogue Sounds. Not the case lately. But guess what town’s bands have been keeping things fresh? That’s right: Grants Pass.

One that stood out was Laurel Ave (a group formed around the solo recordings of guitarist Gavin McNair) who dropped a new collection in late June. The Shaking Hands Demo is rough. Like the whole thing was recorded live without much in the way of microphones or mixing—especially on the drums. That’s probably why it’s called a collection of demos.

But its spine is solid, with a lo-fi rock sound reminiscent of early—very, very early—Modest Mouse or Built to Spill, and well-organized arrangements and song structures.

It opens with “Newspaper,” a solid rocker, with wailing vocals.

Things pick up a bit more with the second track, “Backdraft,” which opens with a nice echoed arpeggio that apes the indie sound. Things get a bit muddier when a wall of distortion crashes in.

The fifth track, “Alright,” has a solid chugging riff that leads into a half-time rocker. The drums still sound like hot garbage, but the guitars are tasty garage goodness. Especially in the upstrummed bridge breakdown.

Track six, “Ghosts and Seashells,” is an acoustic track that could pass for something from the early K Records catalog, with a raggedly strummed acoustic and the hum of synth bass beneath. Halfway through it breaks into an arpeggio with squeals of fuzz peeking in at the edges.

It closes with “Heaven,” which starts with a regrettably long excursion into funky strumming patterns that doesn’t really pay off, but transitions into a nice lo-fi ballad in the vein of Pavement.

Shaking Hands Demo is definitely not saleable album quality, and probably not for the average consumer used to polished radio-ready mixes. It’s fidelity is low enough that its actually slightly questionable decision to distribute the collection to the public. But rock and roll is about rocking and rolling, not setting up mics and twisting knobs like a goober. And in that, it succeeds. Which is why I am eagerly awaiting a higher-fidelity recording.

Shaking Hands Demo is available as a pay-what-you-want download on Bandcamp.