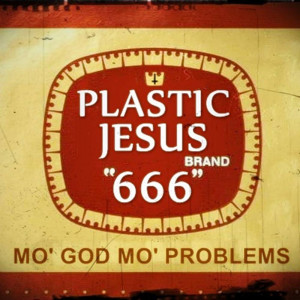 There are times when it feels like Southern Oregon has more banjos than Deliverance, most of them making the baffling choice to dress up and celebrate the dustbowl, when people were poor, starving and battling polio; you know, “the good old days.” But a growing number of string bands are emerging from the punk scene, bringing bluegrass and butt-flap together for a rawer take on contemporary folk.

The album has seven tracks of songs written like Crass, and played like Earl Scruggs, including a pretty interesting take on “Gangsters,” by second-wave ska masters The Specials. Plastic Jesus also does a pretty sweet Bluegrass take on Iron Maiden in their live set, though that cover didn’t make the record.

Like mid and late ’80s punk records, the production value rides the fence nicely, with a sound that is listenable, and yet whose characters is not polished out of existence. The band managed an especially nice sound for the washboard.

But some of the pieces of that whole are lacking. Fiddle player Julian Jones’ melodic flourishes are catchy and effective, but they’re not always strictly in tune. He’s at his best when the band leans toward Irish jig territory, as they do on “Gaptooth.”

Though two thirds of the record are great, the remaining third sometimes sounds as if all the players wrote their parts without regard to how they match up with the other elements of the song.

“The KKK is a beautiful thing, because without them we wouldn’t have any cops,” the band sings on “My Life Covered in Spit,” just before a whimsical kazoo solo. “”Burn it down/ burn it down/ like the world trade center, put them bodies in the ground,” singer Tyrell Trimble sings on “Burn it Down.”

It’s pretty waspy to critique punk lyrics as profane—and Tipper Gore can eat a jar of bees in this critic’s opinion—but political punk’s edginess is best is in the integrity of its bile, leaving offensive for the sake of being offensive to the shock rockers like G.G. Allin. And putting the brutal murder of thousands of people on a pedestal may sound like the sort of edgy revolution-boosting critique punk specializes in, but the act is not much different from than the tyrannical behavior of plutocrats that rest of the song lambasts, especially when the culprits committed said murders in pursuit of a theocratic autocracy. It gets even weirder towards the end of “Burn it Down,” when there is a harmonized vocal breakdown that sounds pretty half-hearted, considering the sentiment. Even the band’s tagline, “PLASTIC JESUS: FUCK YOUR MOM,” rings pretty hollow. why not suggest she wears combat boots while making trite boilerplate insults? That’ll show us, the listeners! It all comes off more “ain’t I a stinker,” than “smash the system.” Which is a shame, because those moments when Mo’ God Mo’ Problems are on, are spot on. The driving fiddle of “Gaptooth,” and the gritty vocals of the album’s first track, “Whiskey and Wine,” are great, as is its cover of “Gangsters.” Together, they’re almost good enough to carry the rest of the album.