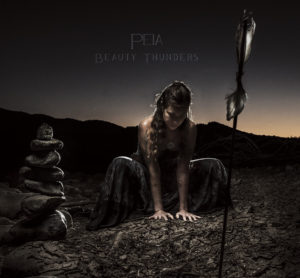 As a critic, I’m rarely shy about my predispositions. I like my music loud, underground, and firmly rooted in modernity. Tradition is well and good in a general sense, but as life reflects art, musical pinings for the days of segregation, feudalism, rampant polio and 35-year-average lifespans are far less to me appealing than crafting new traditions of your own—creating culture, rather than having it imposed upon you like prison bars. To borrow from that old axiom, studying musical history is essential, but mostly to avoid being doomed to repeat it, sonically, and culturally.

That made this week’s review, Beauty Thunders, by mostly-local world musician, Peia (Jessyka Luzzi), a tough one to approach.

“As a song preserver Peia has gathered songs from ancient traditions that span across the globe, from the mountains of Bulgaria to the shores of Ireland, touching upon the wisdom and trials of the Native peoples of North and South America and preserving the enchantment of medieval chant and Indian Raga.”

About the only thing I’m pre-disposed to dislike more than choosing to glorify and perpetuate the culture of arcane barbarians IRL instead of just in history books is when it comes in the form of an album-length manifestation of white savior complex. A girl from Connecticut casting herself as the savior of traditional Indian Raga music is a bit south of credible for a list of reasons that would stretch to the moon.

But while I know what I don’t like, I am also glad to put it aside to acknowledge the immense talent on display. Peia’s opera training is evident, and the production quality is stellar. Even the worldly elements are delivered with stylistic panache and follow-through, leaving only her bio to betray her stateside origins.

The title track, “Beauty Thunders,” begins with the sound of water, and the soft plink of a ukulele with a rumbling cello beneath. Her voice comes in vamping a melody, with a punchy horn-like melody with themes borrowed from Chinese opera. When a drum beat enters the song about halfway through, it means business.

The third tune, “Ciamar A Ni Mi,” is a Celtic standard, “How Can I.” From the droning bass, to the rolling percussion, it’s a pitch-perfect offering—though like a great deal of Celtic folk, a bit forgettable for anyone not already interested in the style.

The album closes with “We Will Rise Again,” a ukulele based ballad that showcases the softer range of Peia’s voice as well.

Peia is obscenely talented. And as an academic exercise, seeking out folk tunes and preserving them is a worthy endeavor. We only have rock-and-roll because the song-preservation work of folklorist Alan Lomax who found the recordings of legendary blues guitarist Robert Johnson, whose style and myth helped birth The Rolling Stones, Led Zeppelin, Fleetwood Mac, Eric Clapton, Jimi Hendrix, Bob Dylan, and so so so many more. But Lomax collected recordings to be preserved in the Library of Congress, not to slap his name on them like a Trump joint. Oral tradition is like a game of telephone, a light, but steady dillution and mutation of the message until nothing remains of the original source material, other than the sincere but mistaken belief that it is the genuine article. In the words of Indiana Jones: “It [preserved cultural artifacts] belongs in a museum.” What belongs on your album is your own music, your own culture, something new you added to the world that will one day itself be worthy of preservation. That’s my six to eight cents.

But song choices aside, she’s got serious pipes, and if it were Opposite Day, or some sort of Star Trek mirror-mirror universe in which my preferences were switched, I’d eat this album up from the magnitude of talent on display.

Beauty Thunders is available as a paid download on Bandcamp.