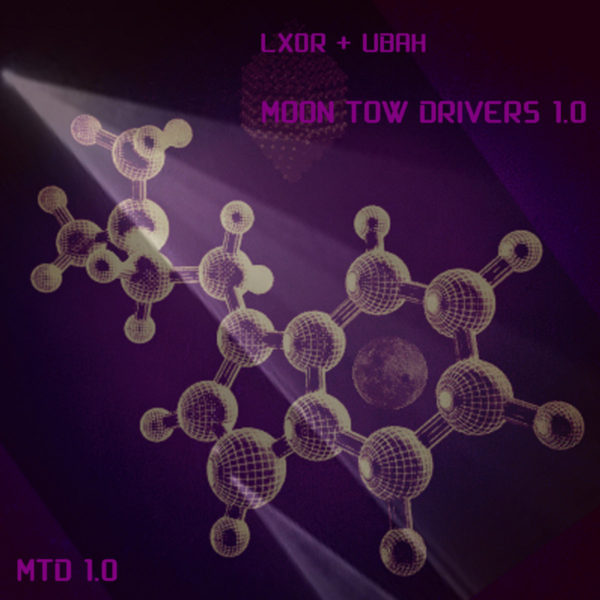 For awhile now, the buzzword of choice in hip hop has been conscious. Ashland emcee Lxor heads in nearly the opposite direction, towards the occult. Topics on his new album, Moon Tow Drivers 1.0, released in late April,  include pentagrams, outer space, devils, secret computer viruses, fallen angels, conspiracies, and more. He namedrops more purported members of the reptilian conspiracy than other emcees. In fact, his lyrics are so rife with occult imagery and metaphor that I wouldn’t be surprised if any of them doubled as a spell of some sort. Eat your heart out, Lana Del Rey.

That occult vibe involves more than just the lyrics however. It is mirrored in the beats courtesy of Ubah, which are noisy, and dissonant, the kicks and claps made of found sounds bathed in gritty metallic reverbs, and eerie samples out of industrial and doom.

The second track, “BAAOWLLZ” grabs listeners right away, with a filtered rumble of synth and the eerie crashes in the background as parts of the beat. The lyrics hit hard, with rhymes coming out fast, and repeating groans and lyrics about bacteria and vampires.

That vocal style continues throughout the album, with densely layered rhymes and little in the way of hooks or choruses. If Busta Rhymes went off the deep end, and I mean like Bruce Willis in 12 Monkeys level off the deep end, then this might well be the result.

Another standout is track six,” Jailbreak Apocalypse,” which switches things up a bit with a less cluttered beat that gives the lyrics more room to breathe.

The overall analysis is that as a statement, MTD 1.0 is the best kind of album: one that sticks its thumb in the eye of the existing paradigms, social, and sonic, that brings some much needed balance to the local hip hop force.

But strictly as a listening experience, it’s a lot. If you’re in the right head-space, it’s great. But if you’re not, then it may just send you into the wrong head space, because as Lxor says in the opening track, he’s “deconstructing and updating reality.” Which is some dark shit.

Send albums for review to editorial@roguevalleymessenger.com. They must be released in the last three months, and from performers based in our distribution area to be considered.