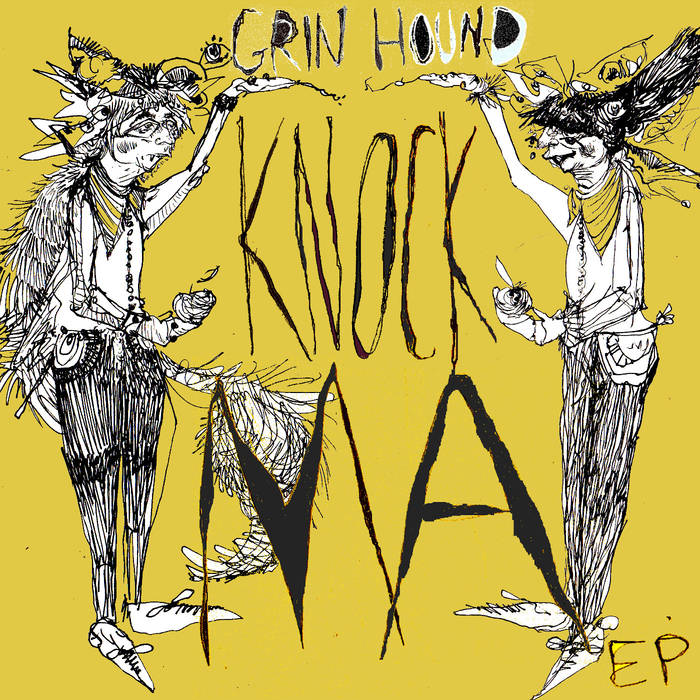 The new EP from Cave Junction-based Grin Hound starts off with the raucous “Basement Parents,” a song that captures their self-described “doo-slop.” That is, the band plays with a particular disregard for traditional tightness—a style that is exciting and refreshing. This self-awareness and ownership of their self-proclaimed “slop” is a feat in and of itself.

Comprising of guitarist/singer Bat Halpin, keyboardist Adam Catscratch, bassist Matthew Chesney, various brass player Dave Rebbie, and drummer Wylden Freeborne, it has been close to a year since Grin Hound released their debut Knock Ma EP and in that time they’ve played many shows up and down the I-5 corridor to promote its release.

The EP continues on into the whimsical “Selkies,” juxtaposing Catscratch’s spritely circus-organ riff against Halpin’s distorted fingerpicking. Through all the abrupt tempo changes, “Selkies” is held together by Halpin’s powerful voice. In fact, that might be the anchor that actually makes this EP work as well as it does.

Perhaps my favorite song on this EP is the beautiful, shambling “Deep Sea Sex Violence.” It begins with a creeping guitar line, joined within the first couple verses by bass, drums, and piano. What is unique about Grin Hound is their ability to make the listener feel like everything could fall apart at any given moment, combined with Halpin’s gift for unusual song structure. Listening to them is like watching a car drive off a ledge, but instead of falling into a pit, a new road is being built underneath it.

Next up is the delightfully off-kilter “Americana.” Featuring prominent horns courtesy of Dave Rebbie, this track opens up the instrumental palette of “Knock Ma” quite nicely. With a vocal reminiscent of Gordon Gano, “Americana” sounds like it wears its name ironically. Last on the EP is the chaotic “Out The Door.” The song makes more use of Rebbie’s horns as well as some of the band’s most chaotic moments thus far.

Overall, Knock Ma is one of the most exciting releases out of southern Oregon last year—and, keeping true to their wavering chaos, I’ve heard the band now is playing with a different lineup and are already working on new material.