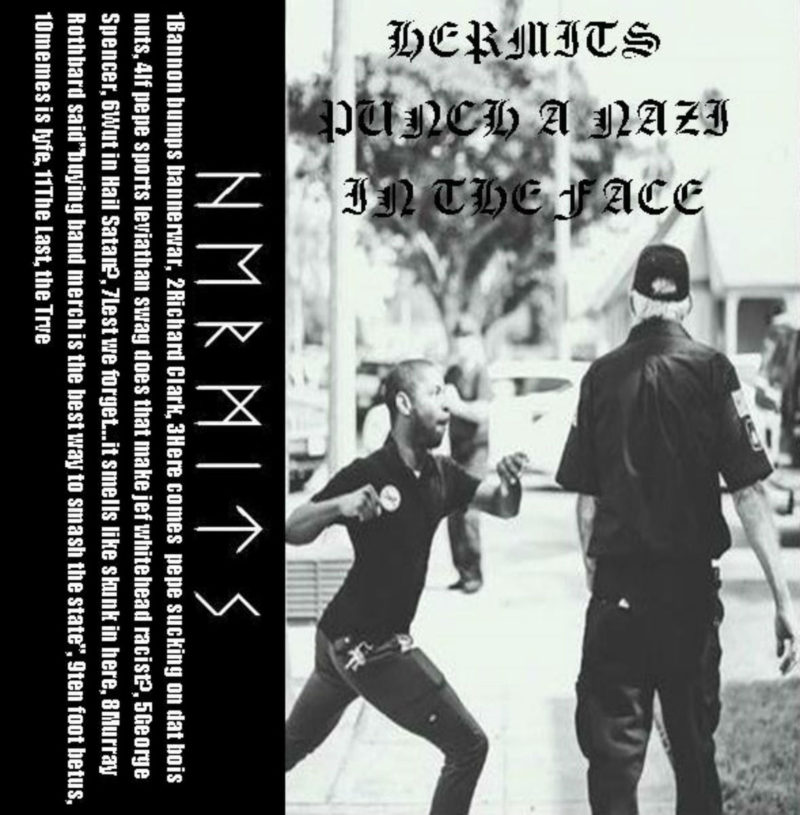 Banjo-slinger Pete Seeger is frequently held up as the solid gold example of a musician that stands for something in their art with songs like, “Where Have All the Flowers Gone,” and “If I Had a Hammer.” However, exactly what the case of the missing flowers, and his economic study of hammer scarcity stand for isn’t entirely clear. Only that Seeger stands for something because people insist it over and over again.

Lack of clarity on one’s stances in their art isn’t a problem with the new EP from Talent band HERMITS. They cut right to the chase with the title: Punch a Nazi in the Face.

If you still aren’t clear where the band stands, the album’s online description is but three words, the simple, all-caps, Indiana Jones-esque statement: “WE HATE NAZIS.”

Hermits, a staple, of the local metal and hardcore scene before it went into hibernation with the closure of Club 66, and the cessation of live shows at Musichead, is not for the uninitiated, and Punch a Nazi in the Face offers no evolution of sound or blistering approach.

The collection is positively Hobbsian: nasty brutish and short. The full eleven tracks fly by in about the time spent on the average song. Its longest track is 1:32, its shortest is only four seconds. And each of them is steamrolling blitzkrieg of distortion and blast-beats replete with howls, growls, and all manner of vocal styles that could all be used to depict hell in a low-budget horror movie.

But then, out of nowhere, a sludgy take on the riff from Michael Jackson’s “Beat It,” suddenly appears in track nine, “Ten Foot Betus,” indicating that while the vocal stylings are such as to render the lyrics meaning as mysterious Pete Seeger’s, you know whatever they’re saying, they’re saying with tongues firmly in cheeks. Despite its name, power-violence is usually a pretty jolly genre.

The short take on Punch a Nazi in the face is that you probably won’t like it. Few will. That’s kind of the point. It’s not for you. It’s not for liking either. It’s for making a furious yawp at the world, at the system, at the sonic box of listenability that it doesn’t want to be forced into. It says my wicked jams are an expression of my feelings, and my feelings are that we should punch nazis in the face. I feel strongly on this. How strongly? RAAAAAARRRRRR! That strongly. Damn this song is getting long. Wrap it up fellas!

Well sometimes I feel that way too. So if Hermits be the food of punching Nazis, then play on. Crank the volume to 10, then cock back a fist and let ten middle fingers fly.