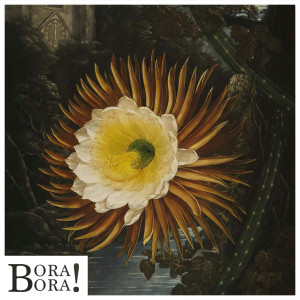 In the music world, much was said of Las Vegas band Imagine Dragons Grammy for Best Rock Performance in 2013. And while loads of it was the typical sort of slander directed at whomever’s on top, the more substantive conversation was about whether or not the lagging synth-driven sound should even be considered rock, or what the term meant anymore. Musical styles evolve, sure. But a far more direct line can be drawn between Chuck Berry and Led Zeppelin than could be drawn between Zeppelin and Imagine Dragons.

Locally, that same conversation about the definitions of rock could be resurrected with an impressive new release from Bora Bora, a side-project of Sean Siders and Grayson Phelps of local indie-rockers Seaons (who RVM readers selected as the region’s best band in our 2015 Best Of issue).

The opening notes of “Flee Thy Muster,” the first of the four songs on the self-titled EP, almost sound like a joke; a bouncy riff on a xylophone that sounds like something off a children’s album. But instead of self-helpy lyrics about nutrition, that riff is joined by swirling synths and a heavy stomp of a beat, as well as a calypso-esque riff on the guitar.

The other three tracks follow similar formulas, blending world music riffs reminiscent of Graceland-era Paul Simon with blasts of synth noise and electronic beats that would sound just as home in a Imagine Dragons or AWOLNation song. There are loads of strange noises and constantly shifting song structures that can’t easily be pinned down into simple verse/chorus structures. Chunks are danceable, others aren’t even close. But it’s thrilling from start to finish.

The collection’s best song is its third, “Banshee Nouveau,” which moves from gospel-tinged organ to a straight-four rock riff on the guitar that drives forward like something off the late ’70s Stif Records catalog.

Bora Bora closes with the jaggedly echoey synth-riff and smooth boom-clap dance beat of “Emerge,” which could pass for a major-key offering from indie-wunderkinds Nurses.

The bottom line is that Bora Bora’s debut EP is national-level work, both compositionally and in terms of its production. It is ambitious, well-executed, and even a little bit audacious, as it was made not in the avante-gardens of the urban underground but blanketed by classic rock radio here in the heart of banjo-country. Whether or not it is rock is a subject for debate, but what isn’t up for debate is that it’s a truly excellent debut.

The band has a full-length release planned for mid-2016, an event this reporter is eagerly awaiting.

Bora Bora is available as a paid download via Bandcamp.