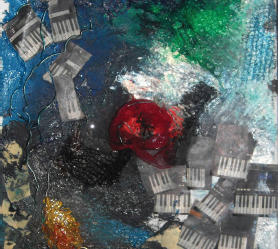 It’s no secret that Southern Oregon’s generation gap is second only in size to Nietsche’s abyss. As a retirement mecca, the young are fine to keep around for washing dishes in cafes, but are politely invited to move to Portland if they want to be heard, not just seen. The result is something of a cultural echo-chamber, in which The Rogue Valley is a mecca for string bands and ’70s-style rock, mostly because that’s what it tells itself, even though it is just as rich with bands whose primary interest in classic rock is to take Fleetwood Mac’s advice and “go your own way.”

Such a group is Single Soul, whose new album, Cold Drone Blues Expanded, is both a step apart from the dominant local paradigm, and a thoroughly enthralling listen in a vacuum.

The album starts with “Resilient Spirit,” a slow, slow, slow synth line, with sparkling clean guitar and drums arriving mid-tune to pluck out a dreamy melody. It’s called blues, but it feels anything but blue. more whimsical, or mystical.

The second tune, “New Wave Girl,” launches with a burst of overdrive, and understated vocals buried in the mix. It’s not exactly breaking new ground, pulling from the Pixies influenced lo-fi post-punk that dominated much of the indie world for the last decade. But it’s solid.

That’s followed by “Brookings,” a moody acoustic ballad, that feels just like the foggy crags of the Oregon coast it is named after. That feeling is continued, though minus the ballad part on “Smoke Will Drift East,” which sciulpts haunting swells of reverb and pulses of analog delay into a moody chord cloud.

One of Cold Drone Blues Expanded’s best tunes is its ninth, “Untitled Symphony 9,” which begins as a synthy ballad, tricked out with descending slides on the guitar leading up to the beat dropping in.

It’s shoegazy as fudge. And if that’s not your jam, then you’ll probably be bored. Especially as like much of shoegaze, the one outstanding weakness is that if you strip away the production, then the root chords and vocals might not stick in your head. But the total package will, which makes Cold Drone Blues Expanded a solid new local entry in the local canon, and in this critic’s mind, one of the most interesting releases of the new year.

Cold Drone Blues Expanded is available as a pay-what-you-want download via Bandcamp. Tragically, so far as I know, the band has no live performances on the agenda.