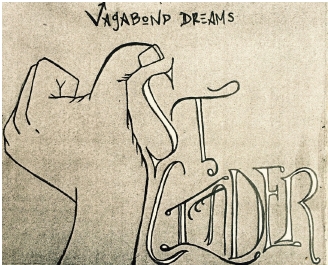 For full disclosure: I’ll admit a certain bias against local old-time supastah’s St. Cinder, who released their long-due debut full-length album, Vagabond Dreams at the start of December, before hitting the road to live out the album’s namesake. The bias is not just because as a critic I’m far more interested in musicians looking forward sonically than being nostalgic for The Great Depression, but because the downtown Ashland houseband’s favorite busking spot is within earshot of my apartment, so I am something of a captive audience for their set on repeat, which over time can turn nearly anyone against even their favorite band.

But even factoring for that, Vagabond Dreams feels like an album best consumed in small doses. The 13-track collection apes St. Cinder’s live set almost perfectly, even being recorded in straight-to-tape live takes. But that means rather than deliberate sonic curation to highlight the unique qualities of each song, the instruments have the same ragged, junkbox tone throughout, and most are played with approximately the same tempo and vibe, with the same rhythmic flourishes. While that delivery excels at making a dancefloor jump, over time it can be a bit wearying on the ear on its own, evoking the feel of a demo more than a final product when consumed en masse.

One notable exception is the album’s fifth track, “Double Yellow Blues,” which slows things down a bit to a mid-tempo ballad, but one undermined with the same raw tones.

The following track, “Greenbelt Blues,” also keeps the slower tempo, and introduces violin and clarinet for a broader sonic palette that compliments the often-eerie vocals of Colton Ort. But the addition of those lusher sounds also makes the washboard sound a bit out of place, though that doesn’t keep it from being one of the album’s best tracks.

It is true that listeners that are not fans of a particular genre often struggle to distinguish the nuance and differences between songs and bands, thinking every piece of punk, or doom metal, or hip hop or jazz sounds the same rather than just having common themes. That may be the case with Vagabond Dreams. Died-in-the-wool old-timey fans may hear more than I do.

But what did surprise me on Vagabond Dreams was standout songcraft beneath the wearying production. The lyrics contain broader themes than the band’s image, and the hooks are all kinds of catchy. A production liberated from fetishizing old-time would have brought those out and potentially created a truly captivating final product. I look forward to hearing that album when/if it is ever recorded. Though not on repeat outside my window every day for months at a time.