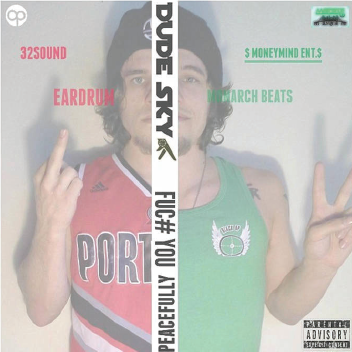 “I was raised on video games, superheroes and sports. It was only fitting that I call myself Dude Skywalker,” Medford rapper Dude Skywalker says on the bio section of his Facebook.

His new album, F#ck You Peacefully, follows suit, opening with a sampled rant from one Jeff “his Dudeness” Lebowski, over a filtered ambient beat and spare plinks of piano.

“I’m like a Jedi and a Sith lord combined in the same,” he raps in response to one of the samples.

Track eight, “B#tch Please,” is one of the album’s best. With a high keyboard loop reminiscent of dirty south, though more in the beat than the vox.

Another standout track is number 12, “My Time,” which rocks a strong ’90s sound, replete with scratchy vinyl noise and slightly detuned piano loop remiscent of “C.R.E.A.M.,” by the almighty Wu-Tang Clan. But lyrical checks to Game of Thrones make it as thoroughly modern as Millie.

The album closes with, “The Sponge,” a reverby beat and distant sounding eastern melody.

The album doesn’t really offer a cohesive sound, but hews towards an electronic vibe, with plinks and washes of synth and pad melodies a plenty. Some of the beats sound plucked from lush retro synth acts like Tangerine Dream. Track four, “Skywalking,” sounds like an old fantasy video game.

But the one problem is that those synths don’t pull back, meaning they can sometimes clash with with Skywalker’s vocals in verses.

And since his lyrical style has a lot of densely-packed rhymes, it can make the songs feel a bit cluttered. It by no means ruins the tracks, but it is noticeable in about a third of the songs on F#ck You Peacefully. Less is almost always more in hip hop.

F#ck You Peacefully is available as a paid download on Bandcamp.