ROGUE SOUNDS: Brothers Reed Add to the Family with ‘Three!’ 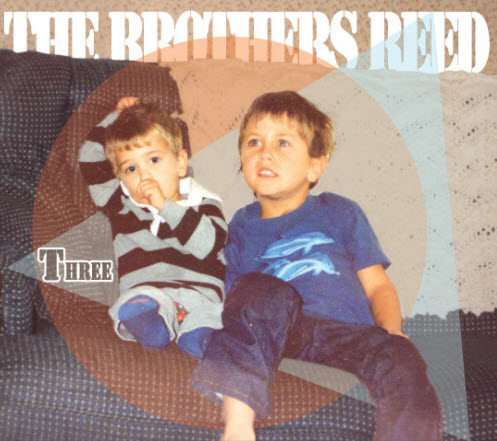 Ashland folksters The Brothers Reed launched several years ago as a leaner, more frequently bookable vehicle for brothers Aaron and Phil Reed’s songs than their nitro-charged bar band, Bucklerash. As an acoustic duo, they could play virtually anywhere, regardless of noise constraints or whether the rhythm section was available.

The duo’s debut, Sick as Folk, was clean and simple celebration of songcraft and vocal harmony, with backup instrumentation used only sparsely. Their follow-up, Monster in My Head, broadened the stylistic palette, incorporating some full band arrangements, as well as bits of rock and reggae. Both, to some degree, felt like the pair searching for their sound, first with a hard break from their previous style, and then with a series of experiments.

But the best simplest summation of the band’s new album, Three!, which it will release with a special performance at Talent Club on Sat., January 6, is that they’ve finally settled into their identity and found their sound.

Three!  moves the group back towards its Bucklerash roots, with boisterous full band arrangements throughout, and a more straightforward Americana or country-rock sound, but builds those arrangements off the folk songwriting and vocal harmony chops that are the band’s stock and trade.

Guitarist, singer, and brother, Aaron Reed took the time to discuss the new album with The Messenger to preview its release. That conversation, edited lightly for length and clarity, is below.

RVM: You seem to have left the indie-folk behind and gone full country on this album. What brought that on?

AR: I don’t feel like this is a full-on country album whatsoever. We’ve always had elements of old school country in our music and naturally that continues on this record but there is really only one country song on the album, “Hoe Down in Heaven.”

RVM: Listening through, I’m hearing more twang, and more melodic and lyrical themes from the country oeuvre, and less folk and groove elements, compared to earlier releases. It’s certainly more Austin than Nashville, but it feels more country than Americana to me. So if not trending towards “country,” how would you describe the evolution of your sound on this record?

AR: I actually feel that these songs can be compared to a lot of the material on Sick As Folk. We play many of those songs now with a full band and I have a feeling if you were to hear them for the first time with drums and electric guitars you might call them country, as opposed to indie folk. … The twang in our voice (mine in particular) probably comes from growing up in Missouri. Like it or not, it just is what it is. I think overall our songs have gotten more refined, especially with the big numbers.

RVM: From the inside, what more subtle differences do you see between this album and your previous releases?

AR: I feel like this album is actually really cohesive. Everything was written out, rehearsed, and tracked in a few days. We didn’t add hardly any bells and whistles and we didn’t overthink anything in post. We had some unforeseen things happen that forced us to essentially record, mix, and master in a couple weeks, so the record ended up being really raw but I think it’s super clean. Sick as Folk was essentially an acoustic album and Monster in my Head was very experimental and quirky at times. When people come and see us play a live show these songs are performed as they are on the album. That in itself is a departure from the first two.

RVM: What did you learn about your own material making this album?

AR: I learned that to get the sound you are looking for it’s best to trust your gut and go with what you know. I also learned that Phil writes some super powerful stuff that translates incredibly with a full band. I wasn’t sure about some of the really big pieces like “Caroline” and “Ancient Ghosts” going in. Sometimes huge songs can be tricky to capture but they really came together and are not lacking in power whatsoever. I also learned that despite many of the songs being dynamically so different, that they can all share a common space on a record. I feel like the recording process really lent itself to this possibility.

RVM: “Place Out There” is something of an outlier tone-wise, with more of a rock vibe musically. What was the thinking on including it on an otherwise fairly unified collection?

AR: I actually wrote this song in a different key with a folky picking pattern and somehow it just evolved into a dark, industrial feeling rock song. Not sure how that happened.

RVM: The album is bookended by two versions of the same instrumental track, first as “Hey Old Man,” and at the end, as a music bed beneath “Simply Trying to Find My Way,” a spoken word piece by Ashland slam poet T-Poe Varnado. Speak to that.

AR: It’s actually really coincidental that T’s poem is essentially a memoir of an older man lamenting his lack of foresight throughout his life, coming to terms with what he feels is a wasted life, but realizing that it’s never too late and that maybe because of the relationships he has created, it is not a waste at all. “Hey Old Man” was going to be the backing track no matter what the poem ended up being and it just happened to be so indicative of the poem. Also, the craziest thing is that T tracked the poem dry and when I dumped it into the session it lined up exactly as you hear it without any editing. The poem is exactly as long as the song. It was meant to be.

RVM: Lyrical content aside, was the plan always to bookend the record like that with a spoken-word piece? Or was it something that was done independently and then included?

AR: As long as he can, our records will always end with a poem by T.

RVM: What’s coming up this year for y’all?

ROGUE SOUNDS: Brothers Reed Add to the Family with ‘Three!’