Reboots in Cowboy Boots: Off the Rails Forces Native American History into a Shakespeare Shaped Box 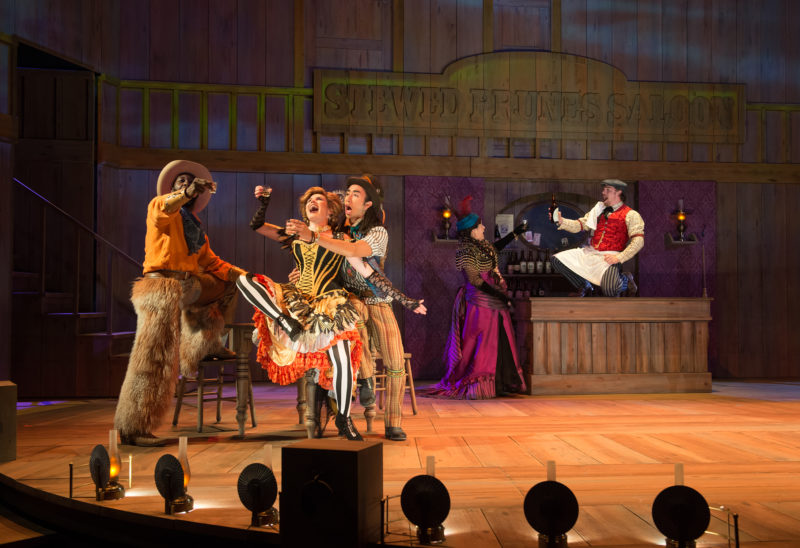 As we exited the theater after seeing, Off the Rails, which opened at the Oregon Shakespeare Festival on July 27, and will run through October 28, my girlfriend said exactly what I was already thinking: “That’s going to be hard to write about.”

And boy howdy was she right. The play’s casting, production, and very existence is a big deal. It’s the first production at OSF by a Native American playwright (Randy Reinholz, an enrolled member of the Choctaw nation of Oklahoma), featuring a diverse cast (including Native Americans in the native roles), and it tells the horrors of the American Indian Boarding Schools—brutal government sponsored institutions that kidnapped native children, and then beat and starved them into abandoning their culture and language and assimilating into Euro-centric Christianity under the slogan of “kill the indian, save the man.” That is a story that needs telling, and a community in need of recognition.

But—and here’s where it gets hard—the play was pretty terrible.

All things in context obviously. A company with the resources of OSF doesn’t phone in a production. The acting and costumes were grand, and the set and lighting choices were solid as well. David Kelly was especially funny in his role as the enthusiastically incorrect Elbow, and Sheila Tousey was fierce in her depiction of Madame Overdone, the matriarch of a brothel.

But a performance that seamless leaves only one thing left to focus on—the thing that should be focused on anyhow—the substance of the piece. And for this reporter, there were some problems.

Among them: it was slow and unengaging plot-wise, inconsistent in tone and language, and packed to the gills with convoluted distractions from what, ostensibly, was the real story: the schools. A running theme was characters rehearsing to audition for Buffalo Bill’s Wild West Show, a plot device that lead nowhere but was included to add song and dance elements, something the playwright said was a way of making the depressing historical elements tolerable. Except that those pretty mediocre routines got a lot more focus than the schools themselves, which were something of a “boy, those places sure suck,” background issue to the central plot: one of the students being sentenced to death for “fornication,” a plot development the characters largely shrugged past as less than ideal. A severely underdeveloped gay cowboy subplot was shoved in, seemingly as part of OSF’s new mission to be diversier than thou (although the mid-show, shoehorned-in duet between the couple was the show’s high point). It all wraps up with a convoluted trial that seemed straight out of a B-movie film noir parlor scene. Many of those flaws can be attributed to Off the Rails being an adaptation from Shakespeare’s Measure for Measure. That accounts for the randomly verbose language, the middle-school deep romantic development, and the nonsense plot-turns.

But for me, the bigger issue was that a play whose major themes centered around how Native Americans were forced to abandon their culture in favor of European culture, was forced to tell that story via an adaptation of an institutionally-revered European playwright. The irony there was neck deep and wholly unacknowledged. Some might say that move was flipping the script, or simply what it took to get the story of the American Indian Boarding Schools told. I disagree. Those stories stand on their own, and would be far more impactful through the lens of the culture they sought to eradicate than as a weak reboot.

That said: I largely stood alone. Or sat alone to be precise. Audiences that have had to wait too long for their stories to be told leapt to their feet in rapturous applause at what seemed to me like a bland energy-suck of an ending. I think they deserved better.

Reboots in Cowboy Boots: Off the Rails Forces Native American History into a Shakespeare Shaped Box