Home»Food»Really All That? Is In-N-Out Burger’s sizzle as much as its substance?
Food

Really All That? Is In-N-Out Burger’s sizzle as much as its substance?

Josh Ozersky (1967 – 2015) was a beloved and bedeviled food critic. Snarky and smart, he was a searing New York-based, recently-relocated to Portland food critic; he wrote for the likes of Esquire and, in 2008, wrote a thin, but densely informative book, The Hamburger. It is a fascinating, albeit at times academic, book about the contested origins of the hamburger and traces the rise of the hamburger as one of the most important American icons. The main supporting cast for the book’s main character (the hamburger) is McDonalds, which plays a central role as an intriguing business model and cultural conqueror. Burger King, White Castle, Wendy’s all receive considerable attention as well. But absent from the book? In-N-Out Burger, which was launched at roughly the same time and from the same California culture loins at McDonalds; that burger joint doesn’t occupy one sentence of the book.

Perhaps that is because outside California—and now Medford—In-N-Out does not have much of a presence, and unlike other fast food burger joints, it does not plow millions/billions into ad campaigns. Maybe Ozersky’s exclusion of In-N-Out from his history was east coast snobbery or ignorance. Or, perhaps it is because In-N-Out has not contributed largely to the evolution of the hamburger. That is not saying that In-N-Out is not a cultural phenomena and, oddly, in spite of its heavily controlled growth as a restaurant chain, a wildly successful business. Yet, in some/many ways, In-N-Out is like Christian rock: It may have a fervent following, but it does not get them on the cover of Rolling Stone or them earn a Grammy.

However, none of that really matters—at least not to the crowds that have been flocking to Oregon’s first In-N-Out as if the hamburger had just been invented. 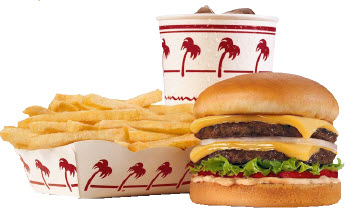 At dusk on a recent Tuesday, I stopped by the relatively new In-N-Out Burger in Medford. It is located near the I-5 exchange, and is as frenzied as shopping the day before Christmas. Two teenage boys, dressed in the signature white outfits, directed traffic in the parking lot, where already 40 cars were lined up, snaking a quarter-mile past the building and ordering window itself. The parking lot was crammed as well, nearly needing a can opener to get into a parking spot, although one spot opened immediately next to the building as I circled through. (Rock star!)

In-N-Out was founded in the post-World War II boom (1948), but unlike its peers, In-N-Out has controlled its growth, largely contained to California, but slowly venturing into adjacent states in recent years. The result has been something like a Marty McFly time capsule, a decidedly suburban bliss atmosphere permeates the store; a clean red-and-white interior with fresh-faced teenage servers. (Where they find all these well-scrubbed teens is a mystery. There was not a zit among the whole lot.) The energy behind the counter is youthful and friendly, another trademark of In-N-Out.

The line for the counter inside was considerably shorter than the line for the drive-through—begging the question, why would anyone not come inside, and experience the time warp. The crew behind the counter quickly, but politely, took orders and efficiently moved customers through.

The menu posted at the stores is only a mere sliver of what is available—and to an uninitiated may beg the question, is this all there is? (The menu basically lists a couple different basic burgers and fries.) I ordered a burger “animal style,” which adds extra Thousand Island spread, a mustard grilled patty and extra pickles. (Order “animal-style fries,” and those are toped with cheese and grilled onions.) Ask for chilis fried into the patties, or go the other direction and order “protein style,” and they’ll forgo the bun and wrap the burger in lettuce.

The burger is the main event at In-N-Out. The animal-style single patty nearly required unhinging my jaw to eat it. It is massive. A fresh and thick slice of tomato, a wedge of iceberg lettuce and a modest, decently flavored piece of beef. It is everything that a Carl’s Jr. commercial promises (but that store doesn’t necessarily deliver).

Plain fries are sub-par: While McDonalds fries are crispy and salty, and the Pacific Northwest chain Burgerville presents clever variations like sweet potato fries, In-N-Out fries tasted as if resurrected from frozen, even if they weren’t. And, the chocolate shake was adequate, but Wendy’s has better—and shorter waits.

But really, none of that is really the point, is it? After all, like a Taylor Swift concert, it is more about the event than the substance.

Really All That? Is In-N-Out Burger’s sizzle as much as its substance?