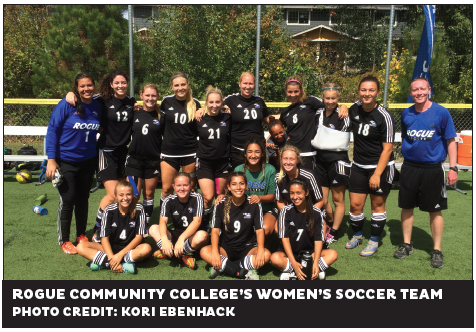 This coming fall, Rogue Community College isn’t only looking forward to the start of the academic year. Beginning with men and women’s cross country and soccer teams, the school added an athletic department last year. Now in its sophomore year, the athletic department and teams are moving past that first building year, and pinning hopes on steadily notching up some victories and attracting more recruits.

Cross-country coach Cole Watson arrived from the esteemed program at the University of Oregon, and is excited to build a program at RCC. Participating on the cross-country team at UO earned him a number of awards, and he has the extensive knowledge and experience to help his athletes improve each season. His main passion, he says, is to “provide an opportunity for young guys and girls in this valley who wanted to run after high school.”

Adding more runners to the men’s team, Watson expects greater achievements as a team. “Our cross-country teams are expected to be in the top 50 percent of the league this year,” says RCC Athletic Director Kori Ebenhack. “Under Coach Watson and assistant J.J. Moses, I would say we can reach the top 75 percent.”

At this point, there aren’t enough women to compete as a team (a team needs five runners to score), but as individuals, Watson says, “they come out [and] work hard. Their goals are the same. As far as individual progress as runners, they’re still getting the same opportunity as runners.”

While improving the runners as a team and as individuals, Watson also holds academics at a high standard. He asks every one of his recruits what they want to get out of RCC, “making sure that they get their Associates (degrees) or [use] RCC as a stepping stone.” He’s also thankful for the addition of track this year in the spring, as it will bring out more runners to the team and get more students involved in the Athletic Department. With more athletes getting involved, it’s “starting to make the whole experience better for the kids,” he says.

Soccer is the second sport that RCC is using as a building block for their athletic program.

“In this 2016 season,” says women’s soccer coach Rusty Veth, “I am most looking forward to seeing what these athletes are truly capable [of] together.” He describes the difference between this season to last year as “night to day.”

“I was hired so late when we got our first season going that my recruiting cycle was such a small window,” he says. “2015 we had great people, 2016 we have characters that are not only athletically driven, but I know will perform in the classroom.”

With 14 new recruits and one returning player, Veth is confident the program will develop into a strong team with a competitive nature. He says, “Any perceived failure by an individual outside of this team is only seen by us on the inside as an opportunity for growth.” Though he considers the roster small, he pays attention to preparation and cool down after each practice and game.

“The season is short and can feel like it’s over in a snap,” he says, “so we have to make the most of the time we have. I think we are already starting to turn some heads, though, and it’s awesome to see the hard work being noticed.”

Both men and women’s soccer teams already have one win as the season is already underway. For Ebenhack, this fall season he’s most looking forward to “watching the athletes compete––we have some tough returners on each team and lots of newly recruited players who are very competitive and serious about their sport.”

“My expectations are that we continue to improve in every way we can,” he continues. “A new program has many hurdles to overcome and the coaching staff I have is really professional, dedicated, and hardworking. I am grateful to have all of them on board, they make all the difference to a developing program.”

RCC’s fall sports schedule can be found on the Athletic Department’s website at RogueCC.edu/athletics.