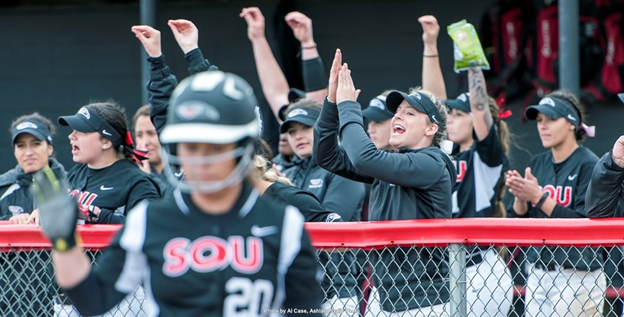 The term “softball” may have some unfortunate connotations to your average layman, as the sport is anything but fluffy and delicate.

Southern Oregon University’s current roster is proving this supposition to be correct with their vigor and stamina, propelling them to second place in the Cascade Collegiate Conference (CCC). Head Coach Jessica Pistole attributes this to their moil and initiative for improvement.

“Our goal is to compete for a conference championship and make a deep run at the National tournament,” says Pistole. “In order to do that, we need to believe in each other, fight for each other, and do everything we can for the team. Our physical talent and discipline of the game will certainly win us some games but if we want to win championships, we have to rely on the power of serving each other and what it truly means to play for the sister next to you.”

This camaraderie has manifested itself in a record of 25 wins and 8 losses, four of the latter category resulting from a strident sweep by the Corban Warriors, who are now in possession of first place in the CCC. Despite this rude awakening, Pistole is confident that this impediment is only a temporary ill.

“Getting beat 4 times [in a] weekend exposed some very important areas that we have been falling short as a team, says Pistole. “I am hopeful that what we have taken from those losses are some of the most important things we will learn this year. We have an opportunity to be a better team than we have been yet this season.”

The Raiders have four upcoming games against the Oregon Tech Owls in Klamath Falls. After this there are only eight more games in the regular season, and the Raiders are inclined to hoist themselves to the Cascade Conference Tournament on May 5th.

Being a mentor to a group of aspiring young athletes is no small task, as finding the perfect balance between stern acerbity and warm encouragement takes a great deal of experience. Luckily, this cognizance belongs to head coach Pistole through years of experience leading the softball teams of Biola, William Jessup, Utah State, and Twin Falls, earning numerous accolades along the way.

“The most rewarding aspect of coaching for me is getting to see the growth that takes place in the lives of my players, my coaches, and myself over the course of a season,” says Pistole. “A year with the same group is a long time and the challenges each person faces together and individually are real. As a coach, I have the opportunity to be a part of this growth as students, as players, as teammates, as friends, and as leaders who will move on from the college experience and hopefully have some discovered truths that they can draw from years from now. I am extremely grateful for the relationships that I have with my current players and coaches and I am just as grateful for all of those former players and coaches that I have had the privilege of being on this journey with.”