Racing from Top to Bottom: The Challenges of Ski Racing On and Off the Mountain 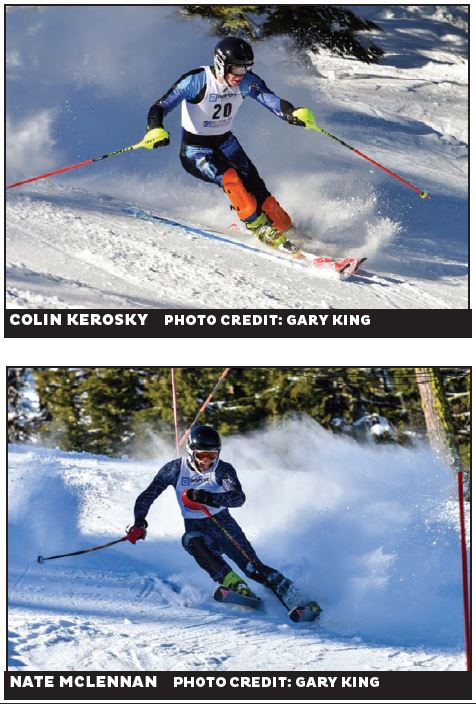 The snow is coming down hard as I load onto the Windsor chairlift. This has been a tremendous year for deep snow at Mount Ashland, and today is no exception. Beside me is a talkative young man with a ski jacket that reads MARA (Mount Ashland Racing Association). He, along with dozens of other ski racers, are competing in today’s races up at the mountain.

“How old are you?” I ask.
“Eleven.”
“And how long have you been skiing?”
“Ten and a half years,” he states matter-of-factly and then shrugs. “I could ski before I could walk.”
“A lot of the skiers we coach have been training for eight or ten years, but I have a couple girls that have never raced or even skied before,” says Gary King, head coach of the Medford Ski Education Foundation (MSEF) and President of the Oregon Interscholastic Ski Racing Association. “The first thing we try and do is teach them how to ski safely. Second, having fun. Once you feel safe you have fun, and the more fun you have, the better you want to be and then you start focusing on learning. It’s circular.”
He says the biggest challenges newcomers face is feeling underachieved. “Skiing isn’t something that you can master really fast. We can coach skiers but ultimately they need time on their skis to really practice. There’s an intimidation factor when you start to include elements like steepness and speed.”
MSEF is a high school program while MARA is a club that works with kids as young as age 3. Both are 501(c)(3) non-profit organizations and play an important role in getting young people involved in the racing community.
“When they’re younger you say, ‘Hey, follow me and do what I do.’ They learn a snow plow and a hockey stop right away. Later on we teach them to take those away. We want them carving their skis. At higher ages they’re starting to put everything together and it builds pride – then they have a breakthrough and now it’s fun.”
“The first thing you need is balance. Balance is your foundation – without it everything else will crumble. Every racer wants to be great and fast, but in skiing fundamentals are key.”
King goes on to mention the importance of technique and tactics. “Technique is your ability and skill level at skiing—tactics is taking that ability and applying it to a race course you’re going down. It’s a lot like driving. Sure you might drive a car just fine, but if you go onto a racecourse you have specific speeds and controls that are inherently different. All of a sudden you’re trying to make the most efficient turns against the clock.”
After weeks and weeks of training, racers prepare for upcoming events. King states that one of the biggest challenges in the ski racing industry is that it’s getting so expensive and participant numbers are starting to dwindle. “Mt. Ashland is like a lone island. It’s very south for the rest of the racing community in the Pacific North West. If you’ve got a couple kids in the program and have to travel elsewhere in Oregon it can cost well over a thousand dollars a week!”

This leads into an extensive conversation about the importance of fundraising. “As a coach, I go to recruit in high schools and no one shows up. When it’s still a 100 degrees outside the last thing people are thinking about is ski racing, but that’s when the fundraising starts.” He advises that if people are interested in joining a ski program to start thinking about it as early as spring. Both MARA and MSEF have lots of information on fundraising and scholarships on their websites.
“It’s neat that the kids do this with intrinsic motivation. There isn’t much glory or press coverage in ski racing. It’s mainly just other skiers and their families at the event. These are the ones who truly realize the efforts you as a racer have taken to achieve what you’ve accomplished.”

Mike started writing in elementary school and never looked back, though is still not a big fan of cursive. He got his first big break when he was picked up by the Elko Daily Free Press as a freelance writer during his two year-long hitchhiking stint from Nevada to Argentina. He currently lives in Ashland.

Racing from Top to Bottom: The Challenges of Ski Racing On and Off the Mountain