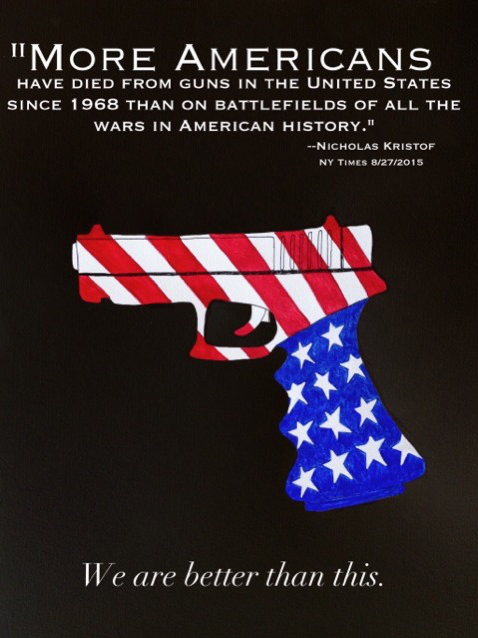 Inspired by The NAMES Project AIDS Memorial Quilt started in 1987 to memorialize those lost to AIDS-related causes, local artists are banding together to create a Vision Quilt to end gun violence. “I had watched [the AIDS Quilt] catalyze the nation in a dialogue about AIDS––people going from a kind of fear to support,” says Cathy DeForest, creator of the Vision Quilt project. “I think that’s an example of the strength of community and compassion, and also artistic expression that can evoke change.”

The project officially started a few weeks before the shooting at Umpqua Community College in Roseburg, where nine students were killed and nine more injured.

“We’re hoping that that will help with some of the healing that I’m sure needs to go on in that community,” says DeForest.

DeForest and her team have opened a national call to artists to contribute to the quilt by creating 18” x 24” fabric panels in any medium (sewing, embroidery, painting, silkscreen, digital printing, etc) illustrating the theme “It’s Possible.”

“We want to help shift the idea that things can’t change,” says DeForest. Through the project, the team at Vision Quilt Network hopes to “cultivate compassionate change and non-violent action” by reaching out to people from all backgrounds and persuasions to participate. “That’s important to us––that we’re respecting each other and just looking for ways to really be creative about thinking about our country in a different way,” says DeForest.

The Vision Quilt Network plans to pitch the project to several national organizations focused on gun safety and, though the project is more about creating a dialogue that enacting political action, the group has its sights on placing the quilt in the political arena within the next year.

“We hope to have 100 panels in Cleveland at the Republican convention and 100 panels at the Democratic convention in Philadelphia,” says DeForest.

The Vision Quilt Network will host several gatherings throughout the valley starting in early November––and the call is open to everyone, regardless of artistic experience or lack thereof.

For information, contact The Vision Quilt Network at visionquilt@gmail.com. Panels can be sent to PO Box 3192, Ashland, OR, 97520.