Steve Fry has been awake since about the time the sun would have risen, if it wasn’t the second-half of seasonal depression season, aka spring, in Southern Oregon. Evidence of the morning’s weather can be found in soaking wet soil and large puddles throughout his farm off Ross Lane in Medford. With each step, his rain boots squish through the mud making audible noises. 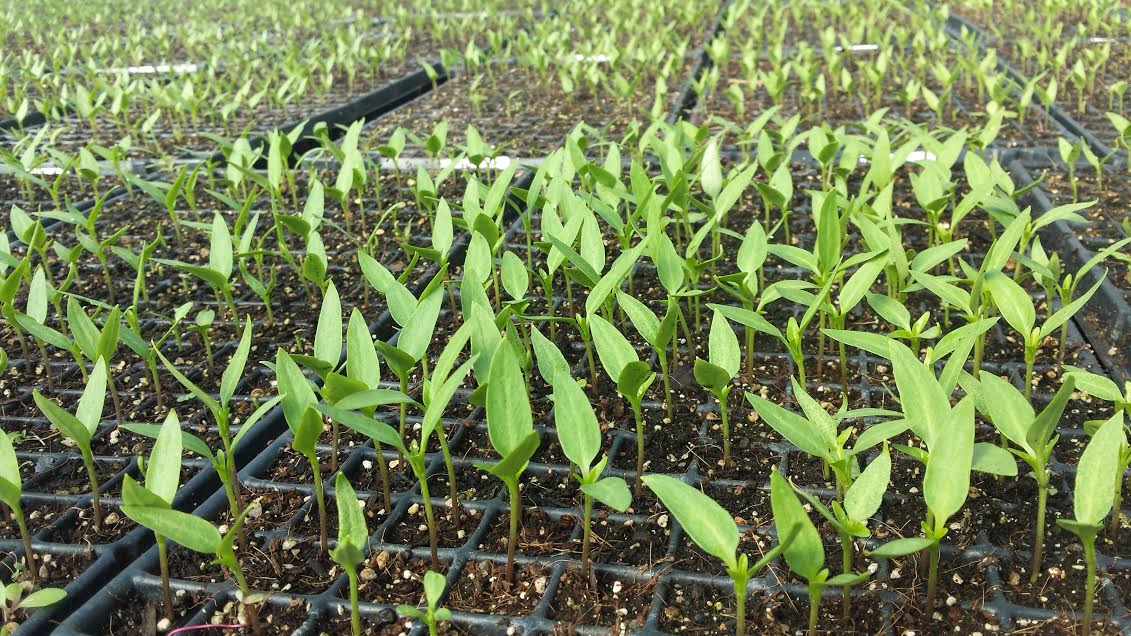 It’s the second official day of spring and the farm is bustling with maturing plants, both little and big. Tiny leaves form tidy lines in the plastic-covered soil to his left. To his right, lush green barley grows several feet tall, basking in the 10 am sunlight. But the up and down weather has been a little uncooperative this year, not to mention the late snow.

“This weather is not conducive to a good fall crop,” he says, leaning towards a plant. “See, it’s starting to flower. So all of the energy in the plant will go into the flowers and not the leaves and you’ll end up with a bunch of little leaves like this,” he says snapping a tiny yellow bulb off the lettuce plant. He pauses, twisting it in his hands. “But people want bigger leaves,” he explains. “We usually get a better crop than this, but the weather has not been very cooperative.”

Fry is the co-owner of Fry Family Farm along with his wife, Suzi. The duo employ a staff of about a dozen this time of year—a few at the growers markets, four to five tending the nurseries, and another five or so manning the fields. And while the fate of other farms may be up in the air (will they sell out to larger companies? Will a group of younger people hit 30 and realize they want to be farmers?), Fry says his daughters are “committed to seeing the farm through.” Almost on cue, one of his daughters, Amber, walks by in brown overalls and a baseball cap. She picks up a tray of 200 tiny plants as her father points out, “Now that’s a hard-working Fry girl right there.” After a brief exchange about the future of farming she heads back outside to load the little guys onto a truck.

It would be an understatement to say the Frys are well-diversified. Garden starts, farm dinners, handmade goodies, and agritourism are just a few of the things they’re involved in. Purple bell peppers, daffodils, red cabbage, fennel, radishes and peas are just a few samples of what they grow on their 90 acres of land, which is split between four locations in the Rogue Valley. In total, they grow more than 40 varieties of fruits and vegetables throughout the season. Their produce is available up and down the I-5 corridor in Oregon all the way from the Ashland Co-op to Whole Foods in Portland. New this year, they’ve started to sell house plants, and have even started a project growing organic barley for a local brewery. Of course, everything the Frys grow is organic, the farm has been organic since day one (1990), says Fry, and Oregon Tilth Certified Organic since 1996. 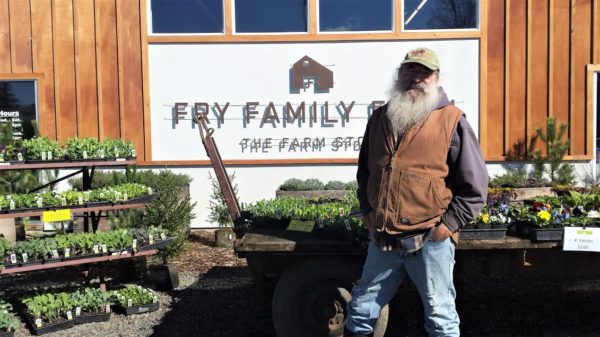 Fry is a tall guy. His nearly white beard reaches halfway down his chest. Beneath his brown vest jacket and sweatshirt he wears a flannel shirt and jeans. It’s easy to see that after 37 years of farming, his mind is always analyzing, assessing, planning. Passing a pile of soil, he stops to explain how it’s made. “We make our own soil for the nursery. You have to buy coconut fiber and make that into powder. You have to buy compost and pumice …” he trails off, saying out loud to no one in particular, “Oh that’s something Ronnie could do!”

He turns the corner to the nursery where his wife and daughter are packing up plants. She warmly welcomes him and greets a visitor with a hug.

Both Fry ladies standing next to the truck answer in unison, “yep!”

“I could have Ronnie make some, yah?” Seconds later he’s on his cell, “Hey Ronnie, I’m over here at the nursery…”

At 65, he’s still going strong and has no plans to retire soon. “We’re not going anywhere, this is what we always wanted to do, and this is great,” he says.

While the late freeze and wet, yo-yoing weather has put planting for Fry’s farm a few weeks behind, he remains optimistic that this will still be a good year. He says long autumns often help in years like this when they have to get a late start. The plant he pointed out earlier may not fair well this year, but he’s got 39 other things going for him.

For a more expansive interview with Steven Fry, click here.

Fry Family Farm was crowned Best CSA in the Rogue Valley as part of the Messenger’s annual Best Of The Valley Awards. Fry says the farm is still accepting CSA members. Packages run from $288 for a half share picked up every other week to $792 for an extended-season full share of 36 boxes over 24 weeks. Those willing to pay more can have their boxes delivered straight to their homes.