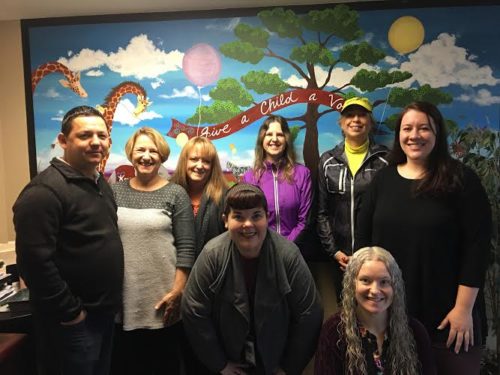 Wenonoa Spivak is the Director of Programs and Education of Court Appointed Special Advocates—or, as it is better known, CASA. CASA was one of the organizations at the Messenger’s Giving Tuesday event, and will be featured in our upcoming Give Guide. CASA works with hundreds of kids each year to help the courts best place them after cases of neglect or abuse have been reported. We took a moment to learn more about the important work CASA does.

RVM: Let’s start with why CASA exists. In 2015, there were more than 800 cases of neglect or abuse in Jackson County. CASA works with the courts to represent these children, correct?

WS: CASA was first founded in 1977 in Seattle when a juvenile judge felt he needed more up-to-date and relevant information about the child in question. He established a corps of highly-trained citizen volunteers to investigate the circumstances leading the child into the care of the Department of Human Services. Jackson County started a CASA program in 1990 and in 2004 CASA of Jackson County became a 501(c)(3) nonprofit.

RVM: What is the most common outcome? It seems like 4 out of 5 children reunite with a parent. What assurances that the abuse or neglect won’t continue?

WS: Jackson County has a high rate of reunifying children with parents, perhaps due to the strong network of community services and collaboration in this county. There are no assurances, of course. However, our community tries to facilitate as many services as possible for parents/family/children for the best outcomes for the children in these cases. CASAs play a large role in that, often acting as a positive influence/role model for parents as well as children, making recommendations for children and parents to the court, and asking the court to keep the case open for monitoring once the children are returned to parents. CASAs will continue to be involved and visit the home on a regular basis once children are reunited with parents.

RVM: The children are represented by volunteers working with CASA. How are these people selected? What training do these people received?

WS: CASAs undergo a lengthy vetting process, beginning with an orientation, a personal interview, extensive background checks and references, approximately 40 hours of training, another interview, and ongoing continuing education and support during their tenure. The core CASA training focuses on issues affecting families in our area: substance abuse, domestic violence, mental health, resiliency, strength-based advocacy, cultural humility, the legal system, and much more. We are very selective when choosing CASA volunteers and do not accept just anyone.

RVM: And what exactly do the volunteers do? They research on behalf of the judge? Ultimately, who are they working for? The judge? The children? Families?

WS: CASAs are an arm of the court and they advocate for the child’s best interest above all else. CASAs are legal parties who advocate for the child’s best interest in court and in any outside meeting or environment where decisions are being made about the child. CASAs visit medical offices, schools, psychologists, and anyone else who has contact with the child to gather as much information as possible about the child in order to assist the judge in making important decisions. In Jackson County, children have court-appointed attorneys who represent them; CASAs advocate for them.  CASAs interact with family members also and attempt to facilitate a healthy relationship between those who care about the child in order to affect the best outcomes for the child. CASAs also hopefully form a positive relationship with the child and may stay in contact with the child for years to come, even after the court case is dismissed.

RVM: It is emotional tough work being in family and dependency courts. How do you stay optimistic?

WS: There are so many amazing success that we see with families every month. This helps us remain hopeful and we know we are making a difference in our community. Staff and volunteers support one another, and work tirelessly for the betterment of children, families, and our community. There is so much hope and so much to be positive about and we are one part of a great community doing tremendous work.