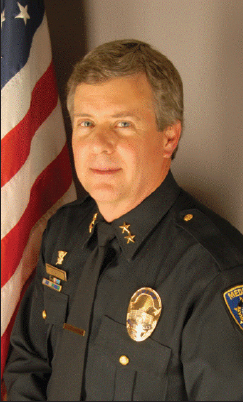 The typical police chief, at least by Hollywood’s definition, is blustery, stern, no-nonsense, always threatening to take away a badge and a gun. Or, there is the other side of the spectrum, the portrayal of a portly police chief as innocuously kind as Santa Claus. Tim George, the police chief for Medford, is neither of those. He is disarmingly (pun not necessarily intended) friendly and easy-going.

When Chief George answers the phone for this interview, he clucks, “alright, let’s get this done,” in the same tone that one would address a backyard barbecue. He is  approachable and plain spoken. The question and answers below represent an annotated transcript. This is part of the Messenger’s on-going series of profiles of local public officials.

RVM: “Serious” crime rates have declined since last year. In some public statements, you have attributed some of the reduction in crime rates to the use of social media. Can you elaborate what that means?

RVM: Over the past two years, domestic violence-related homicides have been zero. That is impressive, and I understand that has been, in part, a result of dedicating officers to those issues.

TG: One of the reasons is domestic violence (homicides) have been at zero for over two years, is we have some great funding. We are able to follow up with every report.

RVM: However, during that same time, it seems as if there has been an uptick in gang-related shootings. Can you provide insights why this trend?

TG: These are rare. We just had a number in a row. Gang activity comes out of the tail pipe of drug use; there is a direct connection (with drugs), and we have an outrageous methamphetamine and heroin problem. But we have saved ten lives in ten months with Narcan.

RVM: There have been two officer-related shootings this year, in March and in May. That’s a big number for a community like Medford. How much is this attributed to mental health issues?

TG: Both. In both scenarios, they fired shots at officers. We just finished up a Crisis Intervention Training last week. I went through it. I required everyone to go through it. 40 hours of training. We’ll hit 600, 650 people in productive custody this year—almost two a day who are endangering themselves or others, or suicidal. That’s a lot.

RVM: Can you talk about recruitment? Where has it been most successful? Where is the department pulling many of its new recruits?

TG: We get lots of applicants. It is difficult to find qualified applicants, though. There are a lot of people who have an issue that disqualifies them, and I don’t think we should lower the standards. People with horrible driving records? Well, driving a police car is a core function. If you’re driving your car carelessly, I’m not going to let you drive our car. We’re looking for that person you want your son or daughter to marry.

RVM: Do you have a favorite cop movie or TV show?