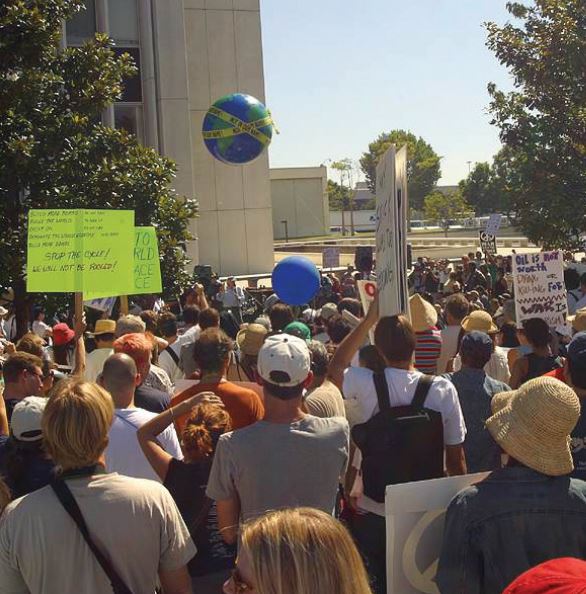 The day after the 2016 presidential election, many people felt let down by their fellow citizens. For women and members of other historically marginalized groups, discouragement gave way to fear as they considered the ways the new administration would/could affect their lives.

While dropping her daughter off at school in Ashland that morning, Samae Chlebowski (pronounced “Lebowski”), commiserated with another parent, her friend Sharon Dohramm.

“We were just deflated,” Chlebowski recalls. “In shock.” The two vowed to do something— anything—to raise spirits and fight back.

It was a major decision for Chlebowski. Thirteen years ago, she stepped out of activism when her parents both passed away around the same time.

“My family was hyper-aware of the challenges the world faced,” says Chlebowski, whose mother was a holocaust survivor. Living in Portland, Chlebowski had channeled her activist blood into countless political marches and rallies, as well as into her work as an art teacher. When she became a parent herself, she decided to take a step back from direct action—as well as teaching—and let her kids take priority. Samae and her husband Chris moved to Ashland four years ago, where she is a stay-at-home mom.

After the election, Chlebowski realized that to be good role model to her kids, signing petitions and giving money to political organizations was not enough.

“I’ve never felt so much fear over something that’s happened in my lifetime,” she admits. Her inner activist had stirred from slumber. After putting her head together with Dohramm and discussing with their wider community of local parents, she decided to direct that inner activist to lace up her boots and join the national Women’s March movement.

What started as a march on Washington, D.C., to be held on January 21, has seeded “sister marches” across the country and even internationally.

Although she describes her past political experience as “class president in middle school,” Chlebowski has been to enough marches to know that they have a special ability to generate positive change. “It’s the energy of the march that’s most powerful,” she says, excitement in her voice. “It’s acknowledging that we have a community that will come together in a time of crisis.”

Chlebowski and Dohramm began reaching out to the community for support of the sister march, and found it immediately. Soon, the Southern Oregon Women’s March had professional graphics, a website, a Facebook event, a handful of local sponsors, and hundreds of individual supporters.

Chlebowski credits the national Women’s March organizers for the training that enabled her and other “green” organizers to give local communities a voice.

“We’ve had the opportunity to learn from the experts on how to market our march, organize volunteers, handle permits, and connect with other march leaders,” she says. “It’s been so exciting to be involved with this amazing, revolutionary group of women and men.” Over 100 sister marches will take place on the Trump Administration’s first day in office.

“What I’ve been telling people is, ‘It’s your march,’” she says. “This is your opportunity to be heard.” Rather than rile against injustice, bigotry, and corruption, though, Chlebowski emphasizes that she and her fellow organizers want to keep the focus positive.

“We’re supporting marginalized groups, focusing on what we will do, what we can do, and how we can come together,” she says.

The Southern Oregon Women’s March will begin at 11 am at the Ashland Library and proceed toward the Lithia Park Bandshell, where speakers and performers will set the tone for the next four years of activism.

“Our goal is to have 1,000 marchers,” she says “and I think we’ll get there.” The group is also raising funds to cover the march’s costs. Three weeks before the event, they’re halfway toward their $5,000 goal.

It seems that Chlebowski has found her activist niche in Southern Oregon.