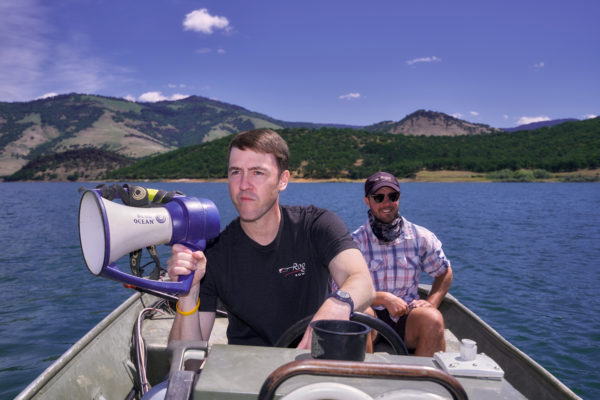 Rick Brown was hired as the new Executive Director and Head Coach for Rogue Rowing less than four years ago, and quickly began stacking up the awards: With silver medals for SOU at the American Collegiate Rowing championships, and as the 2017 US Rowing club of the year. It isn’t surprising. Brown has an impressive pedigree—he competed at Bates College in Maine, a solid program that routinely leads the New England colleges; and has since barnstormed the rowing world with coaching gigs at top notch programs—now adding Rogue Rowing to that list.

Rogue Valley Messenger: You’ve coached for a number of high-level crew programs. What brought you to Ashland?

Rick Brown: From a professional standpoint I saw it as a great opportunity to extend my skills and goals. I believe that all too often people believe moving to a bigger place or organization correlates to a more difficult one. I think quite the opposite can be true and that going to a smaller location brings a whole different set of challenges that help us grow into the people we can all be. I was drawn to the opportunity to be part of an organization and location that I could really make a difference with and grow the access to all that rowing can bring to changing people’s lives. It was also an organization that had a great foundation that I believed was really ready for that growth to happen for myself and everyone one involved—including the organization. And from a personal standpoint the Rogue Valley is an awesome place to raise a family and it happened to be closer to family than we’d lived in a some time.

RVM: How is rowing here different from other places you’ve coached?

RB: The rowing really isn’t. I do find the community more open to youth participation than many other communities I’ve been involved with. In general more people are excited to hear SOU has a team and that kids in grade school through high school are rowing with us here while in other places they’d see involvement from youth being an inconvenience. It’s an open and fun environment to be part of.

RVM: Why is Ashland/southern Oregon a good place to row?

RB: Emigrant Lake is one of the best bodies of water in the country. Many people don’t realize that even at it’s lowest levels the lake is almost 2 miles long which is plenty of water for any non-motorized water activity. We get great water conditions for rowing from March – November every year and are able to sneak out some during the winter months once in a while too. We’ve brought kids in from across the country the last three years and the appreciation and amazement they all have for our lake is priceless. All you need to do is check out some of the pictures on our instagram to see what a spectacular place it is.

RVM: A lot of people think of rowing as graceful and smooth, which it is. But in the boat, it is also grueling, hard-work. Is there a certain type of person you find attracted to rowing?

RB: I’ve seen a lot of different people gain a lot of different things from the sport. But I think in general the people who are ready for commitment to the activity are the ones who stick around and get the most out of it. The number of rewards are endless if you are willing to stick around long enough for those to happen. It’s an activity that gets more fun and more frustrating every time you do it. I always say that the things in life that are the most worth it are the ones that take the most work, and I really believe that about rowing. The more you put into, the more you realize you get out of it.

RVM: Is there a certain type of person who makes a good coxswain?

RB: A coxswain is a coach in the boat. Someone who can learn how to take charge, command respect from their peers and multi-task. I believe coxswains are more ready for leadership roles than their peers because of their experience with their teams.

RVM: Have you read Boys in the Boat?

RB: I have and would recommend it to anyone. The rowing story is great and Daniel James Brown does a wonderful job of painting the picture for even non-rowers to understand the experience but I have to admit that I personally loved the book because the historical perspective it gave about the time and the Northwest during that time.

RVM: What is your sales pitch to get someone into a boat?

RB: Just try it. We understand that most people haven’t had the opportunity to try it as it’s not a traditional sport kids do when they’re growing up. It provides so much opportunity for self-improvement to anyone of any age and any background. Anyone can hop on a rowing machine or get into a boat with us and learn a lot from it.