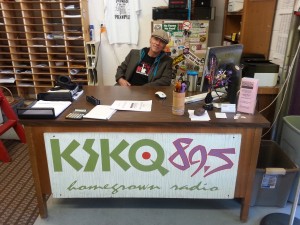 RVM: What was your first experience with radio?

MM: My very first experience with radio was community radio in Portland at KBOO, and that was probably around the spring of 1994. By the fall, they hired me as their pledge drive coordinator. Every community radio has a couple big on-air fundraisers a year and they’re called pledge drives. So, I did that for a while and then I was promotions director for a while.

RVM: How long have you been involved with KSKQ?

RVM: What’s a day in the life of a station manager?

MM: A lot of what I do is keeping us on the air, because I’m an audio engineer, and I have a little sound company, GrassRoots Sound Company. So, I do a lot of, like, fixing headphones and patching mic cables, or even going up to the tower and replacing a power supply. There’s all sorts of things across the board. But an average day, is from equipment repair to talking to people about community radio, to trying to plan and organize our own volunteers to help with fundraising activities, and so on. Every day is different, really. There is no regular day.

RVM: In a nutshell, why is community radio important?

MM: All of the airwaves in the United States are publicly owned, even though they’re full of commercial broadcasters. So when the US government, via the FCC, started doling out all that to commercial, they had to open up for public. So that’s where, for example, PBS and NPR were born. But also, at the same time, were community efforts of radio, and now we’ve had 60 years of community radio.

There’s a fine line between public radio and community radio. Our main goal is to serve the underserved. You cannot get a noncommercial educational broadcast license without having that as one of your top missions. So whether it’s a certain race, ethnicity, gender, sexual orientation, or even musically. What it comes down to locally, is that a good 60 percent of our programming is produced by locals. We train people to get in, learn the equipment, and do good radio. People are underserved a different perspective. That’s the biggest importance of community radio.

RVM: With the popularization of podcasts and internet streaming, is FM radio still relevant?

MM: Well, this is the thing: If there are some really intense states of emergency, what goes down is electrical lines, cable lines. But we have a generator where we have our antennae. That’s where we come in, is that we’re still broadcasting. So if the electrical lines go down, we’re the ones you can still tune into to find out what’s going on. Also, with community radio, we’ll talk about it a little bit beyond what mainstream mass media is telling you.

RVM: Why become a programmer?

MM: We’re constantly reaching out and inviting people to come in and share, because there’s so many wonderful, creative people with different views, whether musically, politically or socially in our community. It’s about having the gumption to get involved and start a show.

For me, community radio gave me the skill sets to move up in nonprofit organizations. I learned how to organize, fundraise and work with all different types of people at all different levels. So I think that’s really one of the greater gifts to the community, is that we’re offering, really, a side alternative education within nonprofits. And you can volunteer at a lot of different nonprofits and you will learn those skills, but here, if you’re willing, we’re willing.