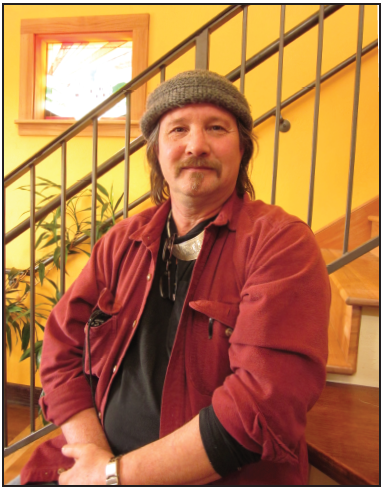 Jason Couch is a Native American, a veteran, chaplain at the Phoenix Grange, and a 55-year resident of the Phoenix area. He’s also a blacksmith, a jeweler, and a documentary film-maker. He’s helped earn Phoenix a designation as a “Bee City,” keeps an eye on important issues around town, and is helping plan the town’s future through his role on the Planning Commission. Phoenix may look a mess right now with its interchange construction and downtown renovations, but Couch has his eye fixed on the post-ashes version of this small town.

Rogue Valley Messenger: How has Phoenix changed over the years?

Jason Couch: It’s getting younger—more people in their 30s, 40s, and 50s now. We’re getting people who see things a little differently. Phoenix is hitting a growth spurt right now. We don’t have a choice—it’s happening.

Originally Phoenix was sawmills, farming and orchards, and that has changed. There’s less orchards, there’s less big farms, and there’s no sawmills left at all, so that has changed the dynamic but what we’ve always had are good, honest people. A couple years ago we were designated one of the safest small towns in Oregon. We want to keep that going.

RVM: What are some of the issues the town is facing, and how is the Planning Commission involved?

JC: There’s always the issue of more housing because we’re in a housing crisis. We’re doing a lot of talk about how we incentivize developers to come and build things that are scaled down a bit from these McMansions that people have decided they’ve needed. I would call it a bit of a mind shift; the town has been kind of placid for 30 or 40 years. We formed an urban renewal committee. We’ve got a coffee roaster and more things are happening. A lot of people weren’t happy going from two lanes to one [through downtown], but it made it more walker-friendly. For years there weren’t even painted crosswalks. We’re getting people to slow down a little bit. When the interchange is done at the end of this year and the final lines get painted, we’ll have a much more pedestrian-friendly downtown and that’s going to draw people. That’s the whole idea: to get people involved in it, not just as a town but as a community.

RVM: What are the plans for development in the northern part of town?

JC: North Phoenix Road is getting improved and we’re becoming an avenue to East Medford. We’re looking at getting industry that’s going to be more conducive to good jobs. A lot of that has to do with how you lay it out. We’re at a very critical point right now. We want industry that’s going to provide better jobs and is going to be—for lack of a better term—holistic, take into account the community. We don’t need a bunch of minimum wage jobs, we need good jobs.

RVM: How is Phoenix dealing with the legalization of marijuana?

JC: What we ended up with is I think the best ordinance in the valley. We came up with a reasonable, up-the-middle ordinance and it’s now law. You can grow 35 square feet of marijuana outdoors if you have a medicinal card, and you can grow up to 100 square feet of it indoors for any purpose. They can do more in industrial zones. In a residential zone those are the rules. We’ll see if people are responsible and respectful.