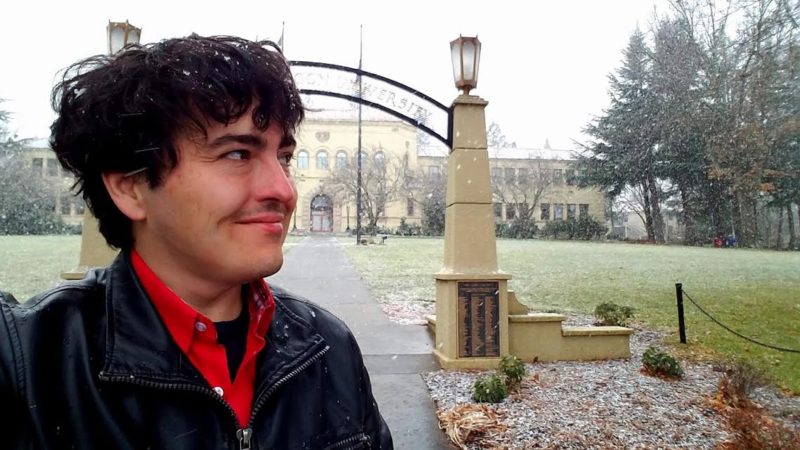 Your razor-sharp Facebook posts fail to break double digits. You scan Huffington, Politico, the Times, the Post, Salon, and the panicky e-mail alerts from your non-profits for nuggets of objective truth. You suspect that CNN, MSNBC, and Fox might drain human spirits more effectively than the Dementors in Harry Potter. You need to take control; you need to meet Charles Douglas, Public Access Coordinator for Rogue Valley Community Television.

“Local people creating news about the issues they care about—there is real, exciting potential there,” Charles Douglas says with conviction. Though Douglas also supports RVTV’s perhaps better-known mission of broadcasting government meetings from Grants Pass to Ashland, his most visible role at the station is getting community members behind a camera or in the control booth, and their productions on the air. “The primary function of community media,” Douglas quips, “is to be a watchdog, not a lapdog.”

Douglas once played that role himself at Northern California’s Humboldt Advocate where he worked as a reporter until the paper closed in 2005. After running an on-line, local news outlet, the Humboldt Sentinel, solo for several years, Douglas followed the path into video production which he now helps others to take. At Access Humboldt, the community media center for the Northern California county, Douglas “learned video production as a craft, not a theoretical practice.” He continues, “I think journalism, too, should be treated more as a craft that one apprentices to. One needs to get one’s hands dirty, to learn by doing, to make mistakes.”

That method of learning predominates in the Studio Production and Field Production classes at RVTV (based at the SOU Digital Media Center) run and taught by Douglas. After only two classroom hours, students operate professional video cameras, adjust studio lights, and design sets as volunteers on RVTV Voices productions. Any interested Rogue Valley resident can take the low-cost classes to learn basic techniques for creating a television show or other video production (full disclosure: this writer has taken both classes).

Upon arriving at RVTV, Douglas made a concerted effort to boost community access programming; he estimates producers have created around 2500 new episodes. Current shows range from “Live at Johnny B’s” (local bands) to “Cooking with Kamud” (an Indian cooking show) to “Peace on Mother Earth,” (contemporary issues and poetry). Many shows such as “Life Passages” and “Steal This Show” have run for five years or longer. Douglas’s philosophy: “the RVTV environment is not uniform in terms of opinion or belief, but it is uniform in encouragement.”

As diverse as RVTV Voices shows are, Douglas hopes to inspire Rogue Valley citizens to pursue “more in-depth, investigative reporting and coverage of local politics and issues.” With robust, local print newspapers declining, a phenomenon he experienced first-hand at the Humboldt Advocate, Douglas asks, “who is watching powerful, local institutions?” And, with the hostility toward journalists demonstrated thus far from candidate and now President Trump, such a role could become even more critical.

Even as the Messenger staff prepared this issue for publication, the White House Press Secretary, Sean Spicer, barred specific news organizations from press briefings. As Carlos Lauria, a program director at the Committee to Protect Journalists, an international nonprofit that advocates press freedom, described in an interview with Politico, “the aim of such denigration is to inoculate the administration from legitimate criticisms by delegitimizing the media. ‘Such a framework is familiar in authoritarian countries where the media is undermined, marginalized and attacked,’ he said. ‘It’s very, very troubling. It sets a terrible example for the rest of the world.’”

After you meet Douglas, and after you finish your classes at RVTV, you might begin to look at that Smartphone in your hand as something other than a personal comfort item. You might recognize, now that you know something about shot composition, lighting, sound recording, and storytelling, that you possess a powerful tool, that you can become a reporter yourself, that you can shape your society rather than have it narrowed for you.