In an ongoing series the Rogue Valley Messenger meets with public officials throughout Southern Oregon. This week we sat down with Ashland Police Chief Tighe O’Meara and discussed his new and progressive plans for APD’s future. Since joining APD in 2010, Chief O’Meara has served as Patrol Sergeant, Detective Sergeant and Deputy Chief before taking over the reins as Chief of Police. 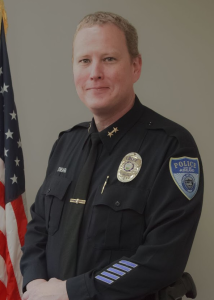 RVM: As APD Chief what are some of your proudest achievements?

Chief Tighe O’Meara: It’s a little early in my chief career to be too proud of any achievements, but I think that we are continuing to build relationships with people of the community and I think that’s one of the most important things that any police leader can do. So I’m working on the legacy that was established by Terry Holderness and others before him.

I’m happy that we are implementing a body-worn camera probably within the next week. I am proud that we are going to be the first police department in the state to adopt a drug amnesty and treatment program project. This is modeled after the Gloucester, Mass. police department program they invented a few years past to encourage people that have addictions to look for help and understand that we are another resource for help. I am trying to obtain a non-matching grant for about a $190,000 to build a radio tower that will greatly benefit all emergency services in Southern Oregon.

RVM: Generally what is the relationship like between APD and the Ashland

TO’M: I’m convinced that we are overwhelmingly supported by the community. This, of course, is a very liberal city it’s a city that embraces questioning authority and I appreciate that and I respect that. I never want anybody to stop questioning authority. There are a few very vocal people that rail against the police department, and that’s fine; I respect that, but overall the support is overwhelming. I also feel completely supported by the council and the city administration without fail.

RVM: You attended the MLK day rally. Can you tell me why you thought it was important to be there?

TO’M: There is a great amount of tension nationally between law enforcement and especially members of minority communities and also people that support the minority communities and generally want to better them. While I think that APD does a good job and treats people fairly, I think that APD is part of a larger national law enforcement community, and collectively the law enforcement community needs to do a better job at engaging all members of our society whoever they be. For an event like the MLK celebration it’s important that police leadership be involved and represent that we want to be a part of a successful resolution, we want to move past this, we want to build trust with all members of the community. While some of the stuff there was hard for me to hear, I never want to hear that somebody feels as though the police are the threat.

RVM: In your opinion what is the most difficult holiday to work as a police officer?

TO’M: In Ashland, it is Halloween. It the busiest night of the year for us we have to bring in outside resources. From a strictly personal point of view November 1 is my husband’s birthday, so the fact that I have to be gone every night leading up to his birthday is kind of problematic.