Home»Feature»Professor of Pencil: Ted Helard Inks in the Next Generation of Visual Storytellers
Feature

Professor of Pencil: Ted Helard Inks in the Next Generation of Visual Storytellers 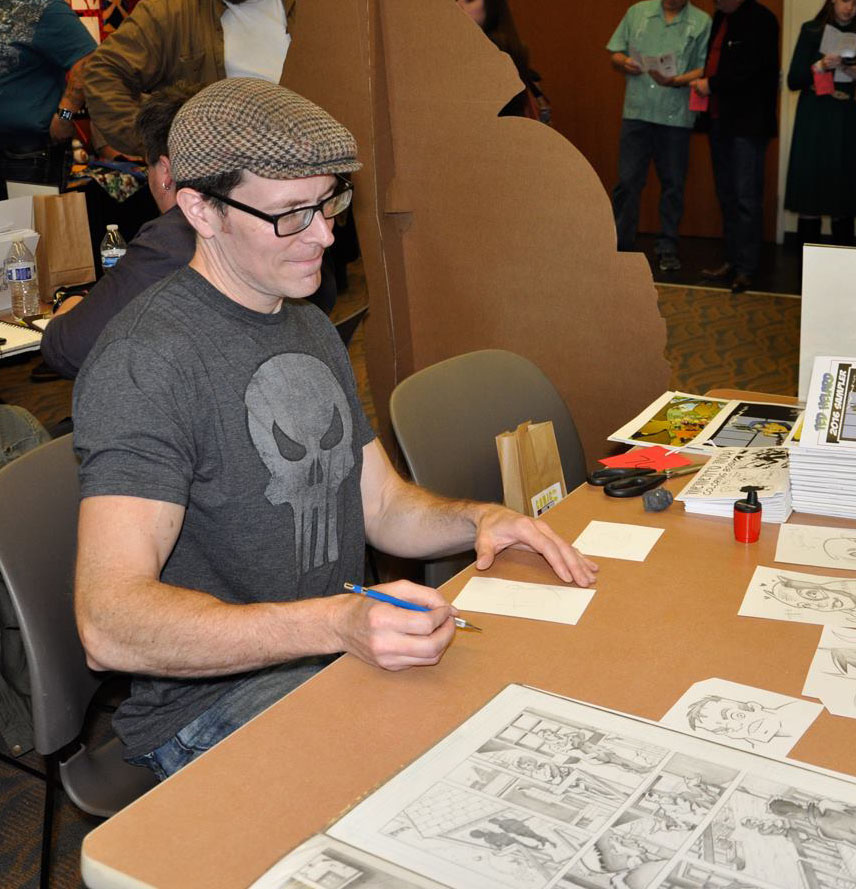 On first read, Ted Helard’s life bears some resemblances to the superheroes on his comic pages. For one, he lives a double life. By day, he’s an executive chef and adjunct professor. By night—or whenever he has a moment between jobs—he creates his illustrations.

In the first chapter of this story, Helard might have said he also has a singular, superhero-esque mission: To break into the industry and become a professional comic book artist.

He still has that mission, but along the way he has gained another one.

Helard grew up in California and attended school at the Savannah College of Art and Design, where he earned his MFA in Sequential Art in 2010. After he graduated, Helard and his wife Heather set their sights on Oregon.

While their initial plan was to land in Portland, which Helard describes as the “comic mecca of the west coast,” a short interlude in Ashland turned into a six-year adventure that continues today.

Teaching gigs soon began piling up at Rogue Community College, Southern Oregon University, and the College of the Siskiyous. Helard found that in addition to drawing his own comics, he very much enjoys helping students develop their personal voice as artists.

“Working with other creatives is one of my true passions,” says Helard, “and one of the specific reasons I think I was put here.” That slight sense of mysticism might come naturally to anyone who spends a good chunk of their time immersed in fantasy worlds, pencil in hand. But Helard’s alter ego as professor of sequential art is nothing if not straightforward.

A typical classroom scene has him stepping around the space in front of the white board as he speaks. Occasionally, he even has his students shut their eyes while he changes places so they can envision what it might look like if his movements were split up into individual drawings.

“We’re not trying to create puzzles here!,” Helard emphasizes, driving home his point about showing motion from panel to panel.

Details like these are what bring a seriousness to a classroom subject that might elicit eye rolls from parents paying tuition.

“It can seem a bit silly,” Helard admits. “Most people think that comics are about superheroes punching other superheroes in the face.” One of his goals as an instructor is to show that visual storytelling can be used in any context. After all, images are much more universal than any one language. When illustrations and words are paired, they can pack a powerful emotional punch.

While Helard looks up to comic artists like Art Spiegelman, whose graphic novel “Maus”, about his father’s experience in the Holocaust, won the Pulitzer Prize, he admits that his own aspirations in the field do involve superheroes.

“My ideal job in the comics industry would be penciling a monthly book,” he says. “Something like Spider-Man or a strong female lead character.” Will he get that job? Helard also admits that the number of positions available in the comic book industry, compared to the number of people vying for them, is not very large. Still, he keeps putting his work out there, keeping the faith that someday he will land that dream gig.

Meanwhile, his double life as a Rogue Valley art instructor has given Helard the chance to be a superhero to the next generation of visual storytellers.

“There’s probably not a school in the valley that I haven’t interacted with in some capacity,” says Helard. In addition, he leads a three-month intensive group for creative folks looking for support and, sometimes, a kick in the pants.

“I call it my ‘aggressive mentoring’ approach,” Helard laughs. “I make them pick a project and set a deadline.”

Those seeking some of that tough love can join Helard’s Character Design workshop at Medford Comic Con this year. Rather just enjoy some visual storytelling? Check out Ted Helard’s Comic Blog at http://tedhelard.blogspot.com/.

Professor of Pencil: Ted Helard Inks in the Next Generation of Visual Storytellers