Pride on the Silver Screen: Three Smart and Emotional Documentaries

The Times of Harvey Milk

There is an interview somewhere in the middle of The Times of Harvey Milk with a union man. In today’s politically-correct world he would be a Neanderthal, and using language and prejudices no longer permissible in polite society. He unabashedly admits his bias against gay men. But he also then explains his admiration for Harvey Milk, the first openly gay elected official in American politics as a member of San Francisco’s Board of Supervisors.

The interview is moving because it is raw, unvarnished, and honestly self-effacing. This film is, yes, about Milk and provides stirring footage and interviews, but it is equally about how people can change their minds—which is perhaps one of Milk’s greatest legacies.

The Oscar winner for Best Documentary in 1984, The Times of Harvey Milk is perhaps one of the greatest political films ever produced, telling three different chapters: The rise of a community member and unlikely candidate to local politics and national importance; his brief, but radical time in office; and, finally, Milk’s assassination that upended San Francisco and galvanized a political movement. It is worth watching at least once, if not once every political season.

Not to be confused with Milk, the feature film by Gus Van Sant, which stars Sean Penn and borrows heavily from this documentary. While the feature film is likable and adds personal stories and scenes to fill out Milk’s life (footage that obviously wasn’t available for the documentary filmmakers), The Times of Harvey Milk is profoundly more moving. Simply the opening footage, with then-Board of Supervisor member Diane Feinstein announcing his assignation to TV cameras is raw emotion that cannot be scripted.

Uncle Howard, which Played Ashland Independent Film Festival in 2015, is a beautiful ghost story, directed by Aaron Brookner about his uncle, a rising filmmaker from New York. The movie is a film about films, and a bit about William Burroughs, and a lot about how AIDs ripped through the cultural heart of the late 70s and 80s, but mostly, it is a mesmerizing story about a charismatic filmmaker, Howard Brookner.

Interestingly, the first third of the movie hovers around William Burroughs, because he was the subject for Uncle Howard (Brookner) first documentary film, a five year endeavor that started as a student project at NYU, along with Jim Jarmusch. There is plenty of candid archival footage that places the viewer as a candid guest in Burroughs New York “bunker.” Andy Warhol, Frank Zappa and Allen Ginsberg orbit in Burroughs’ world, and the film subtly hints at this passing-of-the-torch to a new generation of artists, like Jarmusch, Tom Dicillo and Spike Lee, up-and-coming artists from New York who are all friendsters of Uncle Howard.

Sadly—and hanging like a threatening thundercloud on the horizon—is AIDs, which ultimately decimated much a good portion of this late 70s/early 80s New York and LA artists, taking notables like Robert Mapplethorpe and Keith Haring; lesser known, Brookner was hovering at the periphery of renown when he was diagnosed, having produced two notable documentaries and forewent treatment to complete his first feature film, starring Madonna and Matt Dillon.

“If they had lived,” one friend comments during an interview in the film, “we’d have a very different culture.”

Director Aaron Brookner tells a story so much larger than his uncle’s short, but busy, life; yet, all the while, never losing touch of the precise and delicate emotions that make a life, any life, so important—and that attention to details make this documentary a moving and intimate ghost story. 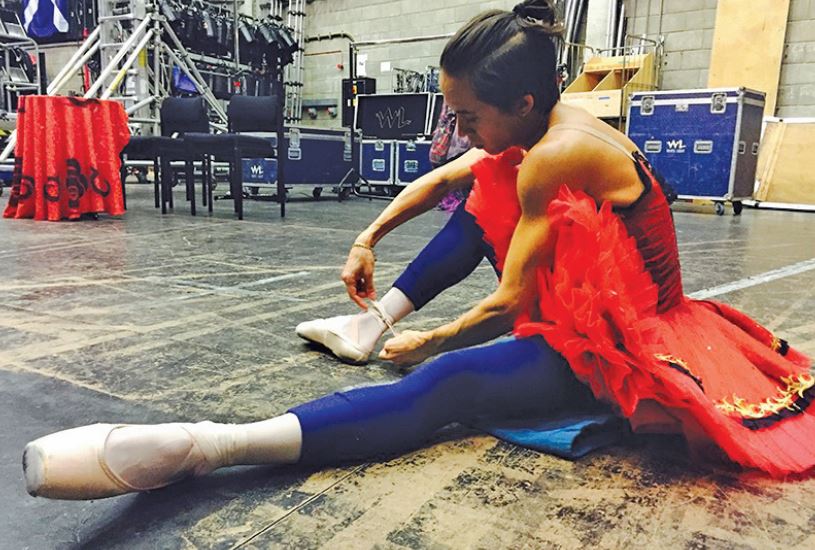 One of the deep-seated ironies of the ballet is that a respectfully helping of the men who dance are gay, yet the bulk of ballets are, not to sound too stiff and academic, not gender-confirming: You know, the prince seeking his princesses kind of stuff.

But for the past four decades, the Les Ballets Trockaderos de Monte Carlo are an all-male, drag dance company headquarter in lower Manhattan’s meat-packing district. The “Trocks” are well-known in dance circles, and perform international, both exalting and spoofing traditional ballet along the way.

Although the promotional materials for the documentary Rebels of Pointe, which recently played the Varsity World Film Festival in Ashland, link the company’s founding to the reverberations of the Stonewall Riots, director Bobbi Jo Hart only subtly plays the obvious political and social commentary throughout the film, casually interweaving these observations about conformity, convention and contemporary dance into the portrait. Ultimately, like the dancers and the “Trocks,” the film is highly engaging and likable.

What is also evident is the remarkable cinematography and editing. There are beautiful shots, loads of quiet close-ups that create intimacy and an equal helping of quick edits that giddyup the pacing. This is a master at work.

Pride on the Silver Screen: Three Smart and Emotional Documentaries