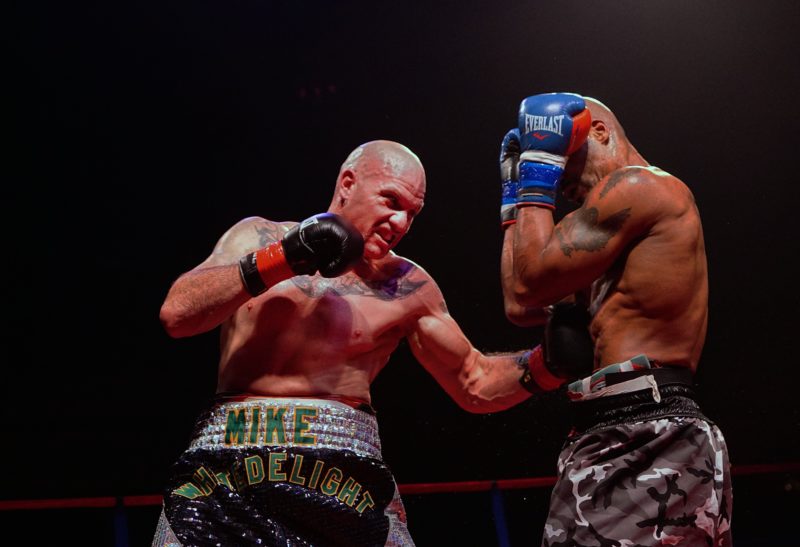 In the movies, boxing looks sweaty with a swollen face. With the speed punching bag at the gym, it looks like a hyperactive feline with a catnip toy. The real world of boxing is about the toughness, the quickness and the strength, and none know this better than Rogue Valley native Mike Wilson.

He returns from traveling the world with his boxing gloves on becoming the United States Amateur Super Heavyweight Champion in 2004 – 2005, and competing in the 2008 Olympics. Now, he has his eye on a World Title, but first, the Rogue Valley Rumble 8 on September 23, which will feature seven fights.

“There is a lot of local talent on this card!” says White Delight Promotions Boxing Promoter Jenifer Wilson. “Ricky Gallegos and Troy Wahosky grew up boxing with Mike at Bulldog Boxing and were both tough amateur standouts—and boxed at a national level! They are back boxing with old teammates again, and they are both back after long layoffs.”

Other standouts include Abraham Martin, who is a local cruiser weight “looking to establish his fan base here,” says Jenifer. And, “Victor Morales is an up-and-coming prospect—an undefeated fighter from Portland.”

Here is what Mike has to say:

RVM: I understand that you grew up here in the Rogue Valley and have been boxing since you were 13, where in the Valley did you grow up and what is it like growing up here and being into boxing?

MW: I grew up in Central Point, and went to Crater High School. I grew up boxing at Bulldog Boxing, ran by Jimmy and Joe Pedrojetti. We had a good amateur program back then, and I have had the opportunity to travel all over the world with USA boxing. I was the number one ranked superheavyweight in the nation.

RVM: What advice would you give to a young boxer starting out?

MW: You get what you put into it. If you put the extra effort in in the gym, it will show in your performance.

RVM: For those of us who only know boxing from the movie Rocky, what are some specifics about the sport that get missed on the big screen?

MW: A lot of professional boxers still have to work full-time jobs to support their families and train on top of that to get ready for fights.

RVM: Your record is 17-0; how do you plan to maintain this winning streak?

MW: My professional record is 17 wins, 0 losses. I plan on taking some regional title fights to get the opportunity to have a World Title shot.

RVM: What is special or unique about the upcoming Rogue Valley Rumble 8?

MW: The Rogue Valley Rumble 8 on September 23 is mostly made up of local boxers; it should be a great action-packed night of boxing.

RVM: Where is your favorite place you have traveled in your boxing career and why?

MW: In 2010, I traveled to Australia to train with Danny Green, the Australian world champ to get him ready to fight BJ Flores. I was there for five weeks, and it was a great experience.

RVM:: Do you have a most memorable bout, and why?

MW: Fighting in my hometown in front of all of my friends, family, fans and community supporter is the best feeling!

RVM: How do you maintain your focus in the ring?

MW: I know that I have the community supporting me, and I want to make them proud.

RVM: What is your greatest strength when it comes to boxing?

MW: I’m a seasoned boxer and can adjust and adapt to any style in front of me.

RVM: Where do you see yourself in five years?

MW: Within five years, I see myself obtaining a World Title.