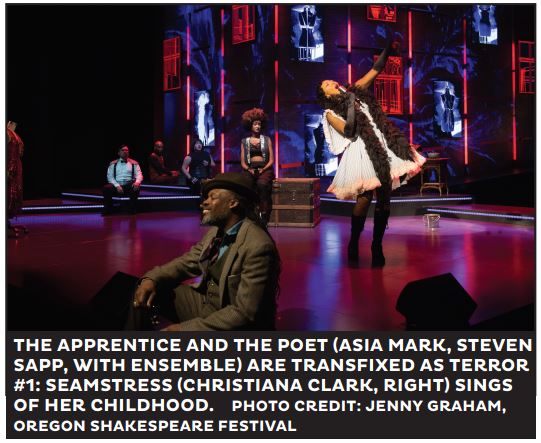 In the opening scenes of UniSon, the character Poet (Steven Sapp) finds himself pulled back, unwillingly, to the land of the living when his Apprentice (Asia Mark), like a latter-day Pandora, opens a trunk of his unpublished work. This postmortal invasion of his carefully hidden secrets unleashes the Poet’s seven Terrors—characters and stories that haunted his mind, his memory, and his work over the years. He will not rest until these ghosts have their say and his sins, and theirs, are forgiven. What unfurls from here sticks in the mind, too; a sizzling mash-up of music, dance, movement, and poetry that plunges fearlessly into the labyrinth of memory and language. What do artists owe to their pasts and the people that dwell in their mind’s eye? Are they exploiting them, or serving them (and us) by immortalizing their short, difficult lives? And when a poet dies, as one character asks, what happens to their unwritten words?

The Poet in UniSon bears some resemblance to the playwright August Wilson—his revered literary status, a penchant for snappy hats—but the resemblance is only a leaping off point: the world-premiere musical at the Oregon Shakespeare Festival was created by UNIVERSES, a New York-based ensemble company of multidisciplinary artists and performers of color, inspired by the poetry of the two-time Pulitzer-winning Wilson and in association with Wilson’s widow, theater designer Constanza Romero. It is directed by Robert O’Hara (OSF’s The Wiz, 2016). UNIVERSES (Sapp, Mark, Mildred Ruiz-Sapp, and William Ruiz a.k.a. Ninja in the cast) has been a resident company at OSF since 2012’s Party People, and, in concert with some familiar members of the OSF repertory (Christiana Clark, Yvonne Monique Clark, Rodney Gardiner, Kevin Kenerly, Jonathan Luke Stevens), the group transforms Wilson’s ideas and words into an exploration of an artist’s unavoidable dance with fear, desire and mortality—the quest to transmute personal trauma into public poetry.

Although built around Wilson’s poetry, this is no poetry reading. The inventive angular set, costume, and choreography create many memorable stage pictures and thrilling moments. The seven terrors take such archetypical shapes as “The Seamstress,” “The Butcher,” and “The Boxer,” with the seven-person ensemble serving as lead roles, dancers, and chorus. Their beautiful singing ranges from standards to rap, spirituals to R&B. There are a few moments when the wall of sound threatens to overwhelm the lyrics, but in many affecting moments, as when the Poet confronts his mother and two possible fathers—“Momma’s baby, Daddy’s maybe”—the lyrics and music (from composers Broken Chord and Toshi Reagon) are piercing.

UniSon takes inspiration from Wilson’s line, “Your willingness to wrestle with your demons will cause your angels to sing.” Over the course of 90 minutes, we feel the Poet’s epic struggle with his past—or what he believes to be his past. In the end, though, we are left alone, like the Apprentice. Our mentors may leave us and our own Terrors haunt us, but we do have the powerful tools of words, memory, song, and community to create some peace with the past.