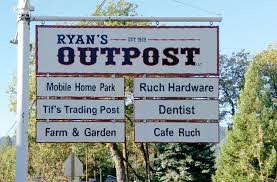 You are not likely to stop at Cafe Ruch. Part of the Ryan’s Outpost complex at entrance to the Applegate Valley—farm and garden store, dentist, hardware—It is not on any “Rogue Valley Cafe Trail,” nor is it an über-trendy, farm-to-table hangout for Californians.

The sign outside promises wine and beer, but, really, there is only beer. Of the four taps, two are dedicated to Arch Rock Brewing from Gold Coast. Cafe Ruch owner, Mike Thaanum, knows the Arch Rock people and likes doing business with them. A selection of national brands in bottles and cans resides in the reach-in coolers., but the Arch Rock Porter almost makes everything else extraneous. Worker’s Pale Ale from Walkabout (Central Point) keeps it company.

On a rainy Saturday, younger people in State of Jefferson hoodies and work boots, phones in hand, share bar space with people of an age for whom conversation is the main reason to have a beer at a place like Cafe Ruch. As the rain subsides, another loose crowd forms at the picnic tables out front. Pizzas and meatball subs issue forth from the kitchen, served by Mike or his wife, Beth, and quickly disappear. A lazy baseball game plays on the lone TV, but it is only the background score to the conversations and cafe bustle.

We 2017 Americans, of all political persuasions, might lament the soulless state of our union. Greed-driven corporations, urban sprawl, environmental deterioration, empty downtowns, demoralized small towns, drug abuse… all of it either a cause or a symptom of declining engagement, tenuous community bonds. These circumstances are not an accident, but the accumulation, like silt filling a harbor, of decades of our choices. When you think pizza, do you think Papa John’s? Burgers, In-N-Out? Beer? Bud or PBR?

Yes, perhaps you might save a few bucks, but each such decision deals a blow to Cafe Ruch, raises the challenge for small business owners like the Thaanums. Yes, perhaps Cafe Ruch might not appear exceptional—no shiny brand, no dazzling display of combo-deals—and yet, it is. Stop there. Arch Rock Porter’s on tap; hope that the meatball sub is on special.