Home»Culture»Opening Nights: The Merry Wives of Windsor and The Odyssey at the Oregon Shakespeare Festival
Culture

Opening Nights: The Merry Wives of Windsor and The Odyssey at the Oregon Shakespeare Festival 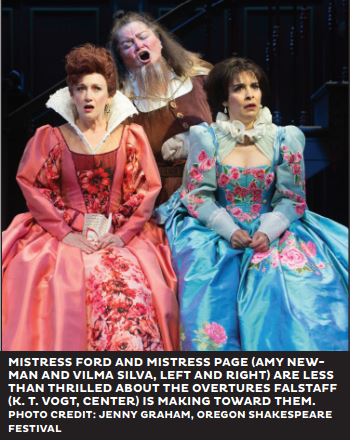 I had the very fortunate opportunity to see the respective plays you directed, The Merry Wives of Windsor and The Odyssey at OSF’s Allen Elizabethan Theater on opening night. In short, the shows delivered an excellent evening’s entertainment. You both faced serious challenges in the material you had to work with and found inventive and provocative solutions. The technical crews and casts transformed your visions into mine, and I delighted in many occasions of theatrical transport to another realm.

Directing stories created by long dead men—400 years for Shakespeare, perhaps 3000 for Homer—must be daunting. I envision you, Dawn, wondering what to do with a comedy that, frankly, would have gone to the equivalent of direct-to-DVD in the late 16th century. Even a Grimm’s fairy tale features graver consequences for the transgressor against community mores (Sir John Falstaff, amply played by K.T. Vogt in Merry Wives) than being frightened and tickled by fairies in the woods at midnight. And your task, Mary, though self-imposed, to re-create a Mediterranean-wide epic on a 44 foot stage, let alone to stitch a fresh garment from worn cloth, especially in an era when digital effects have enfeebled imaginations, is equally demanding, akin to breaking the defenses of an impregnable walled city.

Marrying Shakespeare’s tepid Elizabethan comedy to early MTV, once I adjusted to the concept, saves Merry Wives. Ulises Alcala’s costume and Celia Rivera’s hair designs—feckless Slender in his towering, bright purple hat (subtly played by Cristofer Jean), the outrageous Dr. Caius (played by Jeremy Peter Johnson) with his Billy Idol bleached/spiked hair and Devo-ish colors masterfully blend New Wave with the layers, textures, and exaggerated profiles of Elizabethan dress. Could you have pushed Fenton (William DeMeritt) more toward Prince or Michael Jackson, maybe some Flashdance leg-warmers for Anne Page (Jamie Ann Romero)? The blatant codpieces even evoke the glorious fanny pack and perhaps deserve their own place in the credits. Although the ‘80’s music threatens to carry the show too far toward a jukebox musical, the John Hughes movie vibe makes sense. How far can Merry Wives go toward camp without invoking the wrath of Shakespeare purists? Might as well go for it, because the play itself mostly persists thanks to its authorship.

With The Odyssey, on the other hand, the anachronisms undermine the otherwise appropriately spare visual world of Ancient Greece created by Scenic Designer Daniel Ostling. The varied use of simple wooden poles—as ship’s oars, the timbers of a raft, fencing for a sheep, fighting staffs, and as the perfect weapon for blinding the Cyclops—reflect the nimble capacities of human imagination when given the chance. Athena (divinely played by Christiana Clark) wears the simple attire of a hoplite soldier, carries an extreme spear, and requires no additional adornment. Penelope (gracefully played by Kate Hurster) primarily appears in a cream sundress, her dark hair in a long braid, and the elegant combination conveys her royal stature in sun-drenched Ithaca. The alternately tied and billowing, two-story white drapes at center stage perhaps reflect Penelope’s life in a white-walled palace with tile floors, fountains, and gardens prior to her husband’s departure for Troy. Though it was fun to see Hermes appear riding a messenger’s bicycle, Aeolus (God of the Winds) as a sun-tanned weatherman in a rain-slicker-yellow suit, or the Phaecians as Victorian-era beachgoers in striped swimsuits (the men) and pinafores (the women), I found such intrusions incongruous with the tone of the opening scenes and the overall themes. Perhaps most jarring was the depiction of the Sirens as seductresses or male-fantasy stereotypes—stewardess, sister, chanteuse—all dressed in lipstick red and chanting dictionary synonyms for “woman” and “girl.” Though the scene contained enough layers to occupy a feminist drama theorist for days, it expressed a contemporary meaning for “siren” without acknowledging the potential for beauty in song and feminine power.

Ultimately, both The Merry Wives of Windsor and The Odyssey address the same topic: the nature of human relationships as reflected in the life of the home. Here, I wish, Dawn and Mary, you 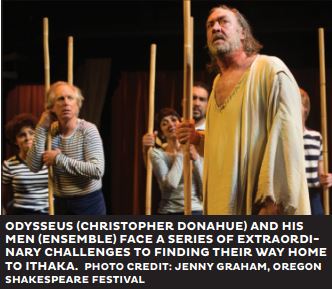 had really pushed harder to interrogate your very old texts. In the Shakespearean, Sir John Falstaff schemes to commit adultery for both sport and to revive his fortune. As the play opens, he and his men have already cheated the effeminate Slender out of his pocket money, and Falstaff plans to go after the more substantial funds of homeowners Master Page (Paul Juhn) and Master Ford (Rex Young). The fact that Falstaff keeps his money close to his manhood (although, in K.T. Vogt’s case, this is a little complicated) is no coincidence. He lives in a world of domination by force: political, economic, and, eventually, physical, if swordplay should become necessary. Mistress Page (Vilma Silva) and Mistress Ford (the appropriately Catherine O’Hara-esque Amy Newman), though they carry out guerrilla warfare in their households, are the property of their husbands, and their husbands speak of them as objects.

Penelope, too, despite her royal status and unwavering devotion, is also property. Though the suitors pester her and wrongly abuse her hospitality, they rightly expect her to re-marry. The fact that Telemachus, her son (Benjamin Bonenfant), possesses the authority to order his mother back to her chambers, not only reinforces Penelope’s subservience but also represents Telemachus’ assumption of “man-of-the-house” status, even though it comes only with the secret support and thereby endorsement of his father. Perhaps we should be thankful that the story of The Odyssey pre-dates Sophocles’ Oedipus Rex.

The wives, without power, resort to tricks or schemes to preserve their virtue. Mistresses Page and Ford, ally with servants and another woman of Windsor, Mistress Quickly (Catherine Castellanos), to fend off Falstaff’s aggression, inept as it is. Only after they have proven their purity to their husbands can they call on them to help punish Falstaff. Penelope keeps the suitors at bay with her promise to marry once she finishes the funeral shroud for Laertes, Odysseus’ father, a shroud she un-weaves at night. Eventually, the unlikely team of Odysseus’ nurse, Eurycleia (Catherine Castellanos), the non-threatening older man, Eumaeus the swineherd (Richard Howard), and Telemachus help Odysseus reclaim his house from the suitors. Penelope, despite her 20-year display of strength, cannot be trusted with the secret of his return. If only Odysseus had shown the same concern for the endlessly expendable men of his crew as the members of his household, even his dog, Argos, showed for him, perhaps his journey need not have taken so long.

In Merry Wives, the desirable Anne Page, subject of pursuit by Slender and Dr. Caius both for her charms and her money, eventually marries Fenton for love (and apparently his ability to make a mean mix tape). Though it plays as sweet, like Molly Ringwald’s reunion with Michael Schoeffling in Sixteen Candles, it might also represent rebellion. Anne Page will not allow her parents to condemn her to “A thousand irreligious, cursed hours/Which forced marriage might have brought upon her,” in her lover’s words. Though, presumably, Anne has become Fenton’s property, her choosing him versus her parents’ marrying her off erodes the model of domination, (as does perhaps the choice of a woman to play Falstaff).

As for the conclusion of The Odyssey, how ought we to interpret it? Is it the triumphal return of a great warrior to the comforts of home? It is a good thing that Zeus and Athena arrange to erase the memories of the suitor’s families before they seek to avenge the slaughter of their husbands, sons, and brothers (a chilling scene). The feud of Ithaca might have persisted as long as Homer’s work. Is it the celebration of the peaceful life we all crave–a secure home, a loving family, a life-long partner? Or, is it all to experience the reunion of Odysseus (a superior performance from Christopher Donahue)–with Penelope, even though we have known it was coming for 3000 years, an expression of relief, of joy, of sorrow, and of passion that alone might explain why we will still sit in the dark for three hours and listen. These are my questions, Dawn and Mary. Well done for raising them.

The Merry Wives of Windsor

Opening Nights: The Merry Wives of Windsor and The Odyssey at the Oregon Shakespeare Festival