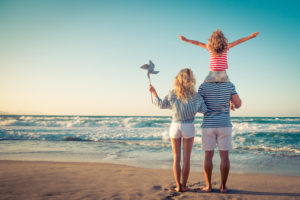 Few things in this world say summer more than the beach. With Memorial Day quickly approaching and the year’s warmest season kicking into gear soon after, people across the country are getting ready to lay their towels on sandy shores. Unfortunately, an influx of humans on the beach can have negative effects on the local wildlife.

Whether you’re planning on hitting Oregon’s top beaches, California’s 3,400 miles of oceanic coastline, or any other oceanfront spot this summer, you have an environmental responsibility to treat the area with the utmost respect. Let’s take a look at how you can enjoy your time in the sun while having a minimal impact on the ecosystem around you.

Environmental advocates have been bringing attention to the harmful impact plastics have on our beaches and oceans for years, but the issue bears repeating. About eight million tons of plastic get into the planet’s oceans every year, harming plant and animal life as well as the water quality. In Los Angeles alone, about 10 tons of plastic fragments make their way into the Pacific Ocean every day.

When you go to the beach or hop on a boat for the first time this summer, refrain from throwing your trash into the water. Even if the area’s animals don’t eat that plastic bottle you tossed into the ocean, the plastic will degrade and pour potentially toxic chemicals into the water. Although it may seem strange to tote your recyclables, trash, and compostables from your spot on the beach to an appropriate receptacle inland, this thoughtful action is important for the wellbeing of marine wildlife.

The cherry on top of a perfect beach day is a picnic basket full of delicious foods. Many beachgoers want to share their edible goods with the animals on the beach, but this generous gesture can actually be harmful to wildlife. When you feed birds, fishes, or other local animals scraps of human food, you run the risk of disrupting their diets and harming their health. As June is the month in which the most ice cream is produced, we won’t give you the herculean task of resisting a cone or two. Just keep in mind that sharing isn’t always caring.

Watching what you eat at home can also have a positive impact on the world’s oceans. Overfishing is a global problem, as common fishing methods result in significant habitat damage. When you purchase seafood, try ensuring that it is from a sustainable source that fishes responsibly. Many online resources have lists of the best stores and restaurants to go to for sustainable seafood.

Peacefully lounging on the beach sounds like the perfect activity for the beach’s health as well as your own. By spending time outdoors you’re getting away from electronic devices and their screens, which the average American spends about eight and a half hours each day in front of according to recent estimates. And by taking the steps mentioned above, you’re not harming the ocean’s waters or wildlife.

Yet, simply laying on the beach for hours on end inherently increases the amount of waste that can be left behind. The wind can easily blow away trash or a wily seagull can pick it up before you have the chance to dispose of it. Try opting for more physical activities instead. Get your feet wet with swimming, the fourth most popular sports activity in the United States, or go for more adventurous activities like snorkeling. Whatever it is, you’ll reduce your time on the beach and your resulting environmental impact.

Being a beach bum isn’t quite as easy as many make it out to be. When you’re spending time outdoors, every little action you take can have an effect on the world around you. Minimize your impact this summer by following these helpful steps. If you want to give your local beaches even more love, volunteer to help with a clean-up day or an event to raise environmental awareness. As much as our little actions can harm the environment, every effort to help makes a huge difference.