Ompah-Lumpa-Dippity-IPA: A Trip to the Chocolate Stout Beer Factory 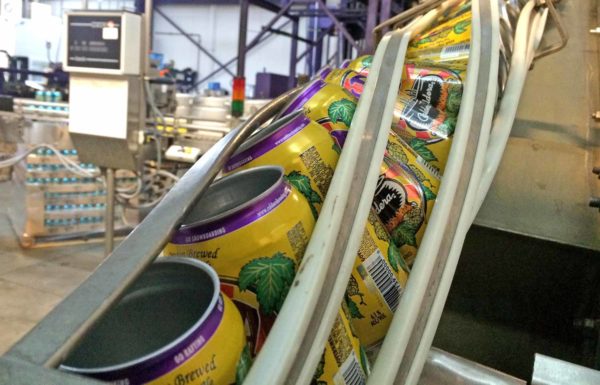 My parents were big fans of Mel Brooks, which meant I grew up watching a lot of Gene Wilder.  The VHS cases of Young Frankenstein and Blazing Saddles were well worn. Willy Wonka and the Chocolate Factory was a staple in our collection as well. Not quite the sardonic satire of Mel Brooks, but it still held the whimsical charm of Gene Wilder.

It’s the story of a relationship between a Charlie and his Grandpa Joe (bedridden for years, but suddenly fixed of his infirmity upon hearing he’d won a tour of a massive candy factory), and their tour through Wonka’s Factory. The movie was odd; at times dark (a child falls into a furnace and Wonka doesn’t so much as flinch, even though OSHA would probably throw the book at him), and yet it held an air of splendor for me. I always wanted to go somewhere like that.  I wanted to see where that brand of magic happened.

It took me nearly 30 years, but I did it. Last week, I got to see Caldera’s massive brewing operation. The feeling is the same, only instead of a Chocolate candy bars, they make Chocolate Porters aged in Oak Bourbon Barrels. Yes, please.

Caldera has been a staple in Ashland, and southern Oregon, for twenty years now. They’ve been around for as long as Craft beer has been popular in Oregon, probably longer, so it’s easy to forget about them from time to time; they’ve always been there. Their operation is widespread.  As a brewery, they distribute to 20 different states, and three different countries across an ocean. They pump out 10,600 barrels in a year. That’s 328,000 gallons or roughly 2.6 million pints of beer. Their canning machines churns out 1,000 cans a minute, and recently they added a hand bottling machine for wholesale beer they distribute. They send their beers to Japan and South Korea, two countries with a growing craft beer market.

The brewing system itself is a four-vessel system (most systems are three vessel, Caldera uses a whirlpool). They have fermentation tanks, ranging from 10 barrels to 120 barrels. They brew lagers and ales using all whole cone hops (no dried pellets), meaning higher quality beers. The flavors of their beers don’t us “flavorings”, synthetic or artificially created tastes. If their beer says it’s a Coconut Porter, it means they put real toasted coconut in there. The Dry Hop Orange IPA uses actual oranges.

The production house is hard to describe, beyond the simile of Willy Wonka. The scale is huge.  The canning machine is painted their iconic purple color and takes up space the size of my apartment. The fermentation and holding tanks are towering behemoths, acting as a testament to how glorious it is when the millennia old tradition of brewing crosses with 21st century industry.

The restaurant attached to the brewhouse (do not mistake the order to be the opposite, the brewhouse is everything) has a full menu of food, and five dozen tap handles, most being beer, but they have a few sodas and a hibiscus tea on tap as well. Meaning if you have a flavor or style of beer you enjoy, the absolutely have it.

Not sure what to drink? Why not try their award winners? This year they had three, with their Ashland Amber taking Gold at the World Cup of Beers. Who knows, maybe it could be the Golden Ticket you’ve been looking for.

Ompah-Lumpa-Dippity-IPA: A Trip to the Chocolate Stout Beer Factory