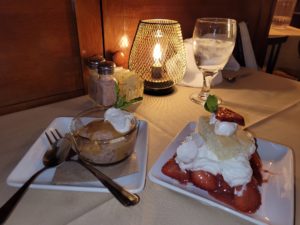 It’s not a word I use often and I’m not likely to use it again any time soon, but “delectable” was the word that popped into my head the moment I placed a spoonful of salted caramel mousse in mouth. I might have even withheld a bit of a moan because it was the most delicious bit of food I had ever had.

And this particular night, that was saying a lot because every dish the Arbor House Restaurant in Talent served for dinner was scrumptious.

On a recent Thursday evening, I found mention of the Arbor House Restaurant online and called to make a reservation, as suggested. I had never been to this restaurant before and really didn’t know what to expect, but all the food photos on their website (arborhouserestaurant.com) looked so delicious I knew I wanted to eat there for dinner that night.

I had no way of knowing that just the night before, the small restaurant had filled up fast. But luck was on my side and I quickly received a call back confirming the reservation for two.

My sister and I left Medford that evening to make the quick drive to 103 W Wagner St. in Talent. Upon arrival, we both immediately noticed how small the restaurant was, but that helped explain the reservation suggestion.

We were seated quickly and I was swept away by nostalgia. I don’t know how or why, but the area around our table smelled exactly like our grandmother’s house. It was an unexpected brief feeling of home that was then covered by the wafting aromas coming from the kitchen.

Our waitress, Melissa of the Calhoun family that began the restaurant in 1974, didn’t keep us waiting to hear the specials long.

Getting hungrier by the second, my sister and I quickly discussed our options and decided to order two entrees that we would then split in half: The pistachio encrusted salmon with creamy orange cilantro sauce and the chicken Dijon with mushrooms and scallions with Dijon cream sauce.

Feeling we could hardly be expected to wait, we also order the chicken satay with mild peanut sauce as an appetizer.

The appetizer arrived quickly and was a bit spicy, but delicious. Perfectly tasty chicken cubes on a stick designed to make us salivate with anticipation.

While waiting for our entrees, we looked around the main dining area, observing family photos throughout the years, making it clear that this was a family restaurant and always had been. We found out later that the Calhoun’s youngest child, Leah, is now the owner.

Before our entrees, we were served smokey tomato bisque with homemade biscuits. I’ve never been a big fan of tomatoes, but even I thought this soup was flavorful and the biscuits the perfect addition to the dish.

Next came tossed green salads that neither of us were expecting, having not heard the part were Melissa explained that all entrees are served with a biscuit, soup and salad. The best part about the salad, was three house-made dressings brought to our table to choose from: Blue cheese, strawberry pineapple vinaigrette and creamy roasted red pepper.

And for the second time that night, this restaurant taught me I don’t always know my tastebuds because I have never liked a vinaigrette dressing in my life but this strawberry pineapple concoction was light, tasty and the perfect blend of fruit and vinegar, neither overwhelming the other. I even purchased a container of the dressing to take home with us.

With our hopes started to rise ever more, our entrees arrived and we quickly split the fish and chicken options. We were also delightfully surprised to find a serving of mashed potatoes and a smaller side salad to go with our meals.

As we dug into the main course, my sister and I couldn’t decide what was better between the pistachio encrusted chicken and the chicken Dijon with mushrooms and scallions. Both dishes were delicious and went perfectly with the mashed potatoes.

And while we ate to our heart’s content, it happened: We heard another server telling a nearby table the dessert options.

The minute I heard the words “salted caramel” I was sold. My sister opted for sweet biscuit strawberry shortcake with fresh whip cream.

We each had one bite of the other’s dessert and again had to agree to disagree on which was the tastier option.

Naturally, I have decided that I was right.

Although I’m new to Jackson County and definitely haven’t tried even half of the available restaurants, I can not recommend the Arbor House Restaurant more strongly for anyone who loves fresh-made, farm-fresh meals in a small, intimate, old-fashioned setting.

So old-fashioned, in fact, that the restaurant accepts only cash and check, so be prepared.