Home»Culture»NW Dance Jumps From Great to Even Better: The Addition of Choreographer Ihsan Rustem Raises the Standard
Culture

NW Dance Jumps From Great to Even Better: The Addition of Choreographer Ihsan Rustem Raises the Standard 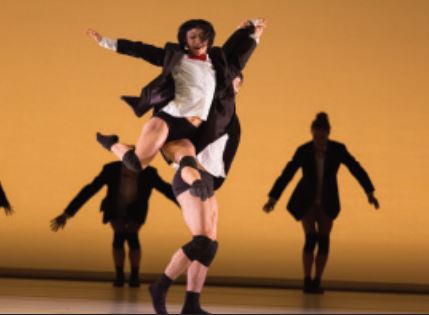 Few dance companies are able to host a resident choreographer. Sure, Oregon Ballet has one, but they also have a massive budget and dozens of dancers. Most other dance companies hire out performance to performance, or borrow blueprints from already performed dances.

But NW Dance is not like many dance companies. It is (sorry for the pun), a step above. In fact, NW Dance Project is a full head-shoulder and thrown way up in the air above most dance companies. Truly one of the best in the country, if not the world—a recognition formalized by not just one dancer but four who have won the esteemed Princess Grace Awards (essentially the Grammy or Oscar of performing arts)—NW Dance is contemporary dance supreme.

And, as either/both part or result of that excellence, NW Dance, with only a dozen dancers and a smaller footprint than establishments like the Oregon Ballet, they have been able to hire Ihsan Rustem as a resident choreographer, a personnel and organizational step that has added excellence to an already outstanding dance company.

NW Dance’s presentation at the Craterian on Saturday, April 22 is a trio of dances; none which are thematically connected, and really share nothing but the same dancers, as each is dreamed up and organized by a different choreographer—including Rustem. Each dance is magnificent on its own terms. But taken together, show off the breadth of talent of their dancers and the wide horizon of the company’s creativity.

Rustem’s “Le Fil Rouge” is certainly the most crowd-pleasing and approachable, while the other two dances provide a darker yin to Rustem’s lighthearted yang. Recently, Rustem also choreographed “Carmen” for performances in Portland (and to tour); a playful and sensuous adaptation of the famous opera. Likewise, “Le Fil Rouge” is fun and wide-reaching, borrowing from the familiar, but updating with playful numbers. Exotic yet familiar, the piece samples pop culture from the past century—with homages to 1920s vaudeville, winks to Parisian ballet, nods to early 1960s Hollywood dance numbers and even pop culture mishmashes like a herky-jerky, but graceful number set to a jazzy cover of Radiohead’s “Creep.”

Unlike many contemporary dance companies, NW Dance’s dances often seem to hold onto a narrative as a shaping force; albeit loosely, and trying to assign a strict storyline to any of the dances is elusive, as dancers ping pong between partners and sprint and jump about the stage at times with wild abandon that has nothing to do with a storyline and everything to do with sheer athleticism. Yet, underneath the mood and motion for many of NW Dance’s presentations are vague storylines.

For “Visible Darkness,” the first of the three dances presented on Saturday, it is a personal story of redemption and rehabilitation of the choreographer Patrick Delcroix. Two years ago, Delcroix fell from a ladder at his home in The Hague. He was unconsconious for a couple days and suffered head injuries. It was a tough road back for him, and the piece clearly borrows from this trauma. It starts slowly and quietly, with a solitary figure crumbled in the forestage. He slowly twists and contorts in silence. It is clearly a homage to Delcroix’s own accident, but if one is looking for meaning beyond the aesthetics (which is by no means necessary for contemporary dance), these first images can stand in for anyone or anything painful or lonely.

From this kernel, “Visible Darkness” blossoms into strong and graceful movements, albeit at times still crumbled and contorted; and from one dancer into three pairs, and a signature of NW Dance, a mix of classical, legs straight, toes pointed, perfectly synchronized dancers that morphs into rubbery, post-modern movements, with each pair of dancers seemingly improvising their own version of events; a beautifully tiptoed line between structure and controlled chaos. It is a serious piece, with not such much levity, but plenty of redemption.

Likewise, “At Some Hour You Return” from Czech choreographer Jiri Pokorny has a heavier tone, although unlike “Visible Darkness” it is often bathed in bright light, starting with flashes that strobe the entire stage, perhaps in the same way that a blinding nuclear blast can fry a negative image on the retina. Although the flashes of light are accompanied by the sound of chirping birds—and illuminate two dancers, cladded in black and frozen in form—there is also an ominous humming undertone. It is unsettling, and captivating. And, again, as wonderful as the dancers are, this performance shows off the additional members of the company—those not on stage, but who are necessary for a dance company to raise to the next level, like Jeff Forbes, who manages the lighting for the company.

NW Dance Jumps From Great to Even Better: The Addition of Choreographer Ihsan Rustem Raises the Standard