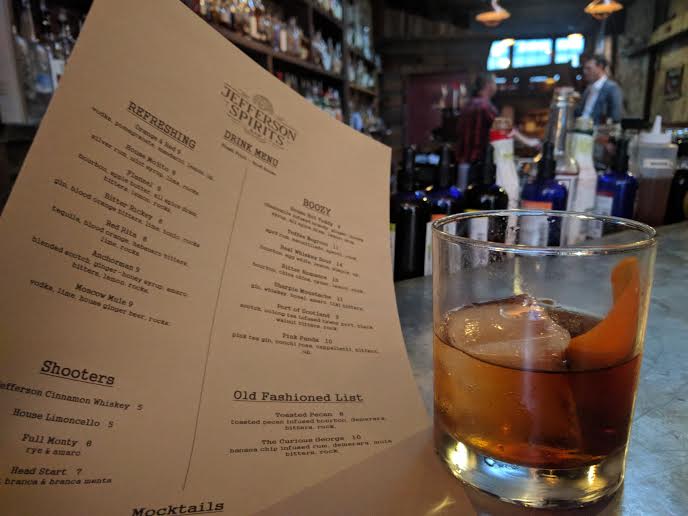 Class is something that’s hard to come by. Certainly, in some of the older parts of Medford, it’s difficult to tell which building is a business, and which is an old rundown set of walls and windows. That’s the nature of our Southern Oregon town.

But there are glimmers of panache, and Jefferson Spirits is one such establishment. Located on main street, it feels as if the Bar was placed in spite of its surroundings. Placed between a strip club and an old (but awesome) antiques store.

It’s a bar with live music, open mic nights, great cocktails and plenty of comfortable seating.  This isn’t a place that bulk ordered their stuff off Harbor Freight or IKEA, but instead the entire place looks custom made. When you enter, you can’t quite tell if it’s new construction or old. The wood paneling is not that of a dive bar, but rather an old saloon. Something with a story, with a bit of character. The atmosphere is cozy, warm and welcoming.

That’s all fine and dandy, but what about the drinks? Jefferson Spirits is able to brag at having well over 250 different spirits, with my favorite, bourbon, being their biggest selection. There are a couple ways into this particular man’s heart: between the 5th and 6th rib, and bourbon. If I had my way, an Old Fashioned would be part of every meal. And certainly, part of a balanced diet.

Their staff is friendly. Most importantly, their bartenders are competent. I’m confident that they could make just about any drink you ordered. Or, considering they’re the professionals, ask them to make you something nice. Tell them the flavors and spirits you like, and they’ll make you your new favorite drink. I asked the bartender, Skyler, to make me his best Old Fashioned and he did. I won’t give away his secrets, but it was damn near the best I’d ever had.

And recently, the bar has expanded. Where before they were solely a street level establishment, they now have a downstairs area. The basement is that same beautiful construction, an eye for style and a rustic look while maintaining an air of class. There’s a downstairs bar that’s open during their peak days (Thursday-Saturday) so no need to tackle those stairs every time you need a drink.

It has it all. Do you like cocktails? Go there and go crazy. Do you like beer? They got those on tap. Do you like good food? Get the baked Mac and Cheese with Prosciutto. Do you like a cozy atmosphere? Sit in their loft on a set of couches and listen to their live music.

Quite frankly, it’s a bar for everyone. They’ll make you a barrel aged negroni just as quickly as they’ll whip up an Appletini. No judgements. It holds class and confidence without the smugness to go with it.

Amid a sea of commercial outlets and odd businesses, Jefferson Spirits is that sparkle that makes Medford a city worth visiting when food or drink is involved.